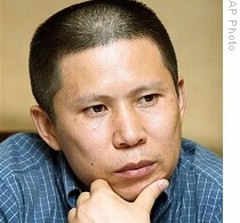 The reason for the arrest could scarcely be more mundane: tax evasion. And yet the suspect is so important and the case so sensitive that China has deployed its internet police to erase his name and any discussion of his disappearance from websites.

Xu Zhiyong, 36, is one of the most prominent and dogged human rights lawyers in the country. Yesterday, more than two weeks after he was taken from his home at dawn, it emerged that he has now been formally arrested. He was yet to be charged, but that is now probably only a matter of time.

The incarceration of Mr Xu, whose clients have ranged from parents of children who died or fell ill after drinking tainted milk last year to death row inmates comes amid a nationwide crackdown on activist lawyers and non-governmental organisations. The aim is to stifle dissent before the 60th anniversary of the founding of Communist rule on October 1. Mr Xu is one of the few elected members of the Beijing district branch of the National People's Congress (parliament).

Li Fangping, one of Mr Xu's lawyers, told The Times: "This is not a formal charge. But the procuratorate will now most likely take the case to court and the court is unlikely to reject their case. We can only watch and wait now." It is rare for anyone charged in China to be found innocent.

Colleagues of Mr Xu say proper procedures have been ignored. His lawyer has yet to be informed of his arrest and learnt of the development only after a notice was sent to Mr Xu's employer, the Beijing University of Post and Telecommunications.

Last month, government officials closed Gongmeng, also known as the Open Constitution Initiative, a legal aid and research group of which Mr Xu was a leading member. The group worked on public interest law, addressing issues such as death penalty cases and the existence of unofficial "black jails". Most recently, Gongmeng lawyers represented parents whose children fell ill last year after drinking milk contaminated with the chemical melamine. The tainted milk was blamed for the deaths of six babies and made nearly 300,000 other children ill.

The centre's closure came after the tax authorities said the group faced a fine of 1.4 million yuan (Â£140,000) for failing to pay taxes. Mr Xu was scheduled to meet tax officials on July 30, the day after he was detained. Colleagues say formal notification of the unpaid taxes has yet to be issued, meaning that his arrest is a violation of due process.

Representatives of Gongmeng have paid back about 700,000 yuan. Under Chinese law, if the taxes are repaid a defendant can face only civil and not criminal charges.

He shot to fame in 2003 with the landmark Sun Zhigang case in which a 27-year-old university graduate died after being beaten in police custody. Sun had been detained under an extrajudicial system called custody and repatriation that gave police virtually unlimited authority to hold anyone if they did not have a residence permit for that area.

Mr Xu and fellow legal scholars petitioned the National People's Congress, questioning the constitutionality of the system, which was abolished later that year.