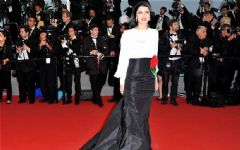 Leila Hatami attends the Cannes Film Festival back in May
Photo: GETTY
Iran has imposed travel bans on star actresses who appear at international award ceremonies without Islamic covering, the country's chief prosecutor has said.

The announcement from Gholam Hossein Mohseni-Ejei, the attorney general, represents a stern warning to the small but growing band of Iranian female film stars that their careers can be derailed for violating the Islamic regime's strict dress code when abroad.

While Mr Mohseni-Ejei, a former intelligence minister, did not mention specific actresses, his comments came in answer to journalists' questions apparently referring to Leila Hatami, star of "A Separation", which has won multiple awards this year, including an Oscar for best foreign film.

Asked at a press conference why police were "confronting" actresses who appeared at ceremonies while wearing hijab (Islamic covering), Mr Mohseni-Ejei replied: "Which person who has appeared overseas with hijab is confronted?

"Regarding this issue, a few people are banned from leaving the country. These people have been invited abroad to take part in a ceremony and under the pretext of receiving an award. Then they have been ensnared in certain people's traps.

"Those people, after taking pictures of their baits, forced them to undertake activities and based on the photographs, they have blackmailed their victims and taken them to a place where they shouldn't. Of course, some of these people, after returning to Iran, are banned from leaving the country."

Hatami was criticised by Iran's deputy police chief, Bahman Kargar, for her attire and for shaking hands with men at last month's Cannes film festival, where she was presenting awards.

While wearing a headscarf and a long-skirt, the actress was pictured with full make-up and her neck exposed. "Where does this behaviour stand in the revolution we carried out?" asked Mr Kargar, who compared her unfavourably to a Bosnian-Muslim actress at the ceremony.

It is not clear if the ban will apply to Hatami, who subsequently turned up at this month's Karlovy Vary International Film Festival in the Czech Republic to receive a best actress prize for her latest work, Last Step.

Another actress, Fatameh Motamed-Arya was banned from leaving Iran for her "political activities" as a known supporter of the incarcerated presidential candidate, Mir-Hossein Mousavi.

However, the prohibition was imposed after she appeared at the Cannes and Taormina film festivals in 2010 unveiled and with her legs exposed.

The best-known Iranian actress to have been banned from going abroad is Golshifteh Farahani, who acted partly unveiled in the Hollywood production "Body of Lies" with Leonardo Di Caprio in 2008.

She was later allowed to leave and subsequently posed naked in the French Madame Le Figaro as a protest against Islamic restrictions on women's dress. Iranian authorities later told her she was no longer welcome in Iran.