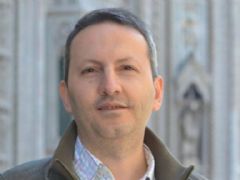 A scientist who worked for a Belgian university has been sentenced to death in Iran on suspicion of espionage.

Ahmadreza Djalali, an Iranian national and professor of disaster medicine at the Vrije Universiteit Brussel (VUB), was arrested in April 2016 while visiting family in the country.

He is due to be executed in two weeks, according to VUB.

Dr Djalali's family and colleagues kept news of the arrest quiet in an attempt to avoid worsening the situation but have spoken out following the issuance of the death penalty.

The VUB announced the news on their website, claiming Dr Djalali had not had a trial or seen a lawyer.

The university's rector, Caroline Pauwels, said: "A scientist performing important humanitarian work, gets sentenced without public trial and is looking at the death penalty.

"This is an outrageous violation of universal human rights, against which we should react decisively."

Head of the VUB's Research Group on Emergency and Disaster Medicine, Ives Hubloue, told Science: "He's not interested in politics. We don't believe he would do anything at all (against the Iranian government).

"We don't believe he did anything wrong. Let him go. Let him do his work. We need him."

Mr Hubloue told the publication he believed Dr Djalali's arrest was related to his international contacts at the university, some of whom are from countries hostile to Iran, such as Israel. But he maintained the contacts were solely scientific.

A petition was launched urging clemency for Dr Djalali and has been signed by more than 40,000 people. It claims Dr Djalali had previously travelled to Iran without any issues.

In custody, Dr Djalali conducted three hunger strikes, according to the petition, which have cost him his health and 20kg in bodyweight.

He was forced to sign a confession to an unknown offence, the petition said.