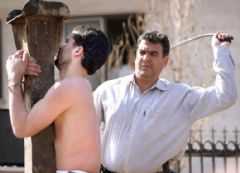 File photo of Iranian lashed in 2005

Two photographers in Iran have been sentenced to a total of 75 lashes after criticising an illustrated book published by a local official.

Both men, who are from Qazvin province, were put on trial when Mohammad-Ali Hazrati, the head of the local cultural heritage organisation, felt insulted by the negative reviews the pair had written in separate posts online about his photography book, "Qazvin, the Land of Times Past".

The photographers, Khalil Imami and Abbas Alipour, had criticised the official for using public money in publishing a book they felt lacked artistic merit. Hazrati's book is sponsored by Qazvin's municipality and reportedly distributed for free. He is also cultural adviser to Qazvin's governor.

Imami wrote a review in a weekly publication called Taban, saying that for a book of 216 pages published on expensive coated paper, it had little artistic value. Imami went into technical details to explain why he felt many of the book's 230 photographs had poor lighting, bad framing and distortions.

Hazrati retaliated by apparently using a pseudonym to publish a response in the same publication, branding Imami's review "insulting" and "partial". Alipour came to Imami's defence, questioning the official's photography credentials and exposing the identity behind the pseudonym.

Hazrati then filed a suit against the two men. A Qazvin court found them guilty of insulting the official and sentenced them to be lashed, local media reported.

"According to the initial verdict of the court, I have been condemned to 25 lashes for insulting [the author] and the other photographer sentenced to 50 lashes," one of the two told a local news website in Qazvin.

There have been similar cases in Iran. In 2012, cartoonist Mahmoud Shokraye was found guilty of insulting an MP, for which he was given a sentence of 25 lashes. The MP eventually withdrew his complaint after the case prompted widespread outrage.