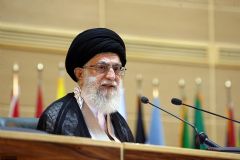 Security officials from Iran's ministry of intelligence raided the homes of eight Iranians who converted to Christianity on July 1 in the southern city of Bushehr, carting them off to solitary confinement.

The arrests of the eight Christians was first reported on Friday by Article18, an organization that promotes religious freedom and supports Iran's repressed Christians.

Article 18 wrote that intelligence agents " stormed the Christians' homes in a coordinated operation at around 9am, confiscating Bibles, Christian literature, wooden crosses and pictures carrying Christian symbols, along with laptops, phones, all forms of identity cards, bank cards and other personal belongings."

Alireza Nader, the CEO of New Iran, a research and advocacy organization based in Washington, D.C., told The Jerusalem Post on Friday: "Reporting suggests that Christianity is on the rise in Iran, along with other non-Islamic religions. This is a threat to the Islamic Republic, a regime based on a narrow and totalitarian view of Islam. As the regime faces more internal unrest, the more it'll crack down on religious minorities it views as threatening its stranglehold on religion."

The Article 18 report noted that "Arresting agents also searched the work offices of at least two Christians and confiscated computer hard drives and security-camera recordings" and "The officers are reported to have treated the Christians harshly, even though small children were present during the arrests."

The human rights website wrote the Iranian regime authorities have not allowed lawyers to gain access to the arrested Christians. The Christians are being held at a ministry of intelligence site in the Persian Gulf port city of Bushehr.

US Secretary of State Mike Pompeo said in late June after the US released its new report on religious freedom that "In Iran, the regime's crackdown on Baha'is, Christians and others continues to shock the conscience."

The U.S. has designated the Islamic Republic as a "Country of Concern" since 1999, because its regime violates religious freedom as defined by the U.S. International Religious Freedom Act (1998). Article18 said the names of the Iranian Christians who were imprisoned are: :Sam Khosravi, 36, and his wife Maryam Falahi, 35; Sam's brother Sasan, 35, and his wife Marjan Falahi, 33; Sam and Sasan's mother, Khatoon Fatolahzadeh, 61; Pooriya Peyma, 27, and his wife Fatemeh Talebi, 27; and Habib Heydari, 38."

According to Article 18, "Khatoon Fatolahzadeh, whose arrest came after six cars carrying security officials turned up outside her home, was released the same day due to her age."

Peter Kohanloo, the president of the U.S.-based Iranian American Majority organization, told the Post: "The Iranian regime's recent arrests of Christian converts prove once again that there is no true freedom of religion in the country. If Europe cares at all about its Christian patrimony, then it should take seriously U.S. efforts at isolating the regime instead of undermining our economic sanctions campaign."