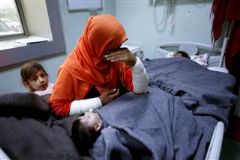 A mother reacts as her daughter is treated for exposure to chemical weapons in Mosul, Iraq, March 4, 2017 (Azad Lashkari/Reuters)

ISIS militants used chemical weapons during the battle for the city of Mosul last week, injuring a number of civilians, according to a senior Iraqi security official.

The official's assessment comes after the International Committee of the Red Cross (ICRC), issued a statement last week saying that their workers had treated patients from Mosul who were suffering from symptoms consistent with exposure to a toxic chemical agent.

Over a number of days last week, the ICRC said it treated 15 such patients.

"The first cases who arrived were a mother and her five children, aged from 1 month to 11 years," Iolanda Jaquemet, an ICRC spokeswoman, told NBC News.

"It was certainly [the result of] a toxic chemical agent, because their symptoms were absolutely clear. People had blisters, they vomited. They had irritation in the eyes and coughed," she added.

The World Health Organization said in a statement that it was "extremely alarmed by the use of chemical weapons in Mosul, where innocent civilians are already facing unimaginable suffering."

The statement added that "the use of chemical weapons is a war crime."

Both the WHO and ICRC said that the patients' symptoms were consistent with exposure to a blistering agent.

A senior Iraqi security official, who spoke on condition of anonymity, told NBC News Monday that the official believed that the chemical agent used in the attack was mustard gas.

Describing the attacks, which took place on March 1 and 2, the official said: "ISIS militants launched a number of Katyusha rockets [targeting] the eastern coast of the city of Mosul, which is under the control of Iraqi forces. They launched those rockets from the western coast that is not completely liberated. Those rockets hit three neighborhoods in the eastern coast that are Al-Zuhur, Al-Mishraq and the Northern Bus Station.

"At least 12 locals had been affected by what is believed mustard gas, among those locals a 2-month-old baby, as well as women," the official added.

The manufacture or use of chemical weapons is prohibited by an international treaty, which has been signed by almost every country in the world.

Iraqi forces have been making steady progress towards the ISIS-held old city center of Mosul. This latest offensive to drive the militant group from their remaining stronghold in the city began on Feb. 19.

The ISIS occupation, and the fight to drive the group out of the city, have had a devastating impact on thousands of civilians who have been trapped in the city, or displaced.

United Nations officials tell NBC News that at least 50,000 people have fled the city since the latest offensive began. Those who have escaped, in many cases braving booby traps and ISIS gunfire to do so, tell of the dire conditions being endured by those still trapped in the city.

"Families that I talked to today had been surviving for weeks on flour and water.

Sometimes some tomato paste and maybe a bit of bread. Food prices have shot up - a kilo of sugar is roughly $20.

"People are also talking about how cold it has been, and they've been burning anything they can find to stay warm, so furniture and plastic. They're tearing tables and chairs apart in order to stay warm. It seems that primarily hunger has been one of the drivers as to why families have left," she added.

Even those who managed to flee with their lives face an uncertain future. Gluck said that the camps housing displaced people were rapidly filling to capacity.

"Pretty soon shelter and camp space will become a critical issue, because the numbers are getting higher and we're running out of space," she said.

Mosul is the last remaining urban center controlled by ISIS in Iraq. Government forces captured the eastern side of the city in January 2017, after 100 days of fighting. The city's capture would be effectively crush the Iraqi wing of the group's self-declared caliphate.