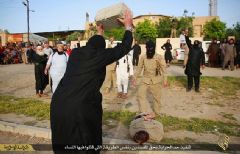 ISIS Carry Out Horrific ‘Eye For An Eye’ Punishment

ISIS terrorists have carried out one of their most savage executions yet, smashing huge concrete blocks onto the heads of two men accused of murder.

Shocking pictures show militants lifting concrete blocks high above their heads as the condemned men lie at the side of the road with their hands tied.

Other images show the gruesome aftermath, the concrete blocks having been hurled onto their skulls.

The two men were bludgeoned to death in Nineveh province in northern Iraq after the Islamic police arrested them for robbing and killing three women.

It is known as a qisas punishment - 'eye for an eye' retribution.

In the background stand bloodthirsty armed jihadists and a baying crowd.

Images of two men being behead by Isis in a Syrian village called Jarnyah, west of Raqqa, also appeared on social media this week.

It's thought that they were executed after being accused of practicing sorcery.

The blindfolded men are seen resting their heads on a wooden block, with a huge machete resting on their necks as a crowd looks on.