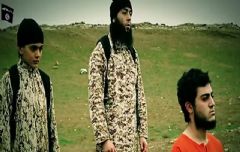 A baby-faced executioner who looks to be no older than 12 appears to kill an Israeli Arab who confesses to being a Mossad spy in the latest stomach-turning video released by ISIS.

The 13-minute clip was released via Twitter Tuesday evening, and shows a seated man identified by his family as 19-year-old Muhammad Said Ismail Musallam calmly confessing to having been recruited by the Jewish State's spy agency, even stating how much he was paid.

Musallam, from East Jerusalem, is believed to be the alleged Mossad spy ISIS claimed last month to be holding, and who was interviewed in the terror organization's February edition of its online magazine, Dabiq.

In the interview, Musallam says he was enlisted into the Mossad by a Jewish neighbor who worked as a police officer.

"He came one day and asked me to work with Israeli intelligence," Musallam said in the interview. "I told him I would think about it, and then went and asked my father and brother what they thought. They both encouraged me to do it and told me that it was a very good job. They told me there was a lot of money in it, and that you could advance to higher positions. I knew at that point that they themselves were working as spies."

According to Musallam, the Mossad wanted him to infiltrate ISIS and provide information about the location of weapons, bases and the names of Palestinians fighting with the terror group.

Musallam says on the video he was caught because he "began acting in a manner that was not typical of a muhajir despite the training (he) had received from the Mossad."

Musallam's father told Haaretz his son was not a spy and had joined ISIS willingly several months ago. Experts have speculated Musallam may have tried to flee the group and was accused of spying and executed as punishment.

One of the most frightening aspects of the video, according to Veryan Khan, editorial director of the Florida-based Terrorism Research & Analysis Consortium, is the threat at the end made against specific Mossad agents, which in addition to providing their names in English and French on a "hit list," also lists their home addresses and maps of their locations.

A similar threat was issued against Jordanian pilots in a video of Jordanian pilot Lt. Muath al-Kaseasbeh, 26, being burned alive was released in February.

While the Mossad are notable targets, ISIS makes an international appeal in the video, Khan said.

"In this video, ISIS appeals to the Palestine people saying 'we haven't forgotten your plight' and issues a call to French speaking fighters, saying 'Your voice is powerful within the state, and your foreign fighters hold key glamorous positions.' To the English speaking audience, they seek potential recruits and political leaders. To Israel, they say "You are not safe, we know who you are and where you live."

Israeli security officials said they were aware of the video but could not confirm that it was authentic.

Near the end of the video, a man speaking in French issues threats against Jews in France, before the boy moves in front of the kneeling hostage and shoots him in the forehead with a pistol.

The boy, who shouts "Allahu Akbar," then shoots Musallem four more times as he lies on the ground.

In January, ISIS released a video in which a young Kazakh boy was shown executing two Russian men accused of spying.

"Since 2015, Islamic State has been pushing hard its "cub" training program and we've seen a significant up tick in 'graduation' photo journals, training facilities and one other foreign fighter child executioner," Khan said. "The use of a child executioner is significant because ISIS is demonstrating the "growing" Caliphate and that they are raising their next generation of warriors now."