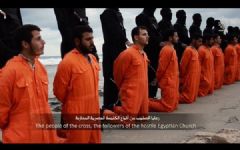 In a new propaganda video released Sunday by ISIS, the militant group claims to have beheaded over a dozen members of Egypt's Coptic Christian minority on a Libyan beach.

The highly produced video shows an apparent mass execution with jihadists in black standing behind each of the victims, who are all are dressed in orange jumpsuits with their hands cuffed behind them.

The five-minute video, released by the terror group's propaganda wing al-Hayat Media, includes a masked English-speaking jihadi who says, "The sea you have hidden Sheikh Osama bin Laden's body in, we swear to Allah, we will mix it with your blood."

Then on cue, all the victims are pushed to the ground and beheaded.

ISIS has imposed its brutal rule on the large areas of Iraq and Syria that it controls, but the beheadings of the Egyptians appears to have been carried out by an affiliate of the militant group in Libya.

Egypt's President Abdel Fattah el-Sisi confirmed in a statement that Egyptian "martyrs" had fallen victim to terrorism and expressed his condolences to the Egyptian people.

El-Sisi called for an urgent meeting of the Council of National Defense and declared seven days of official mourning.

Twenty-one Egyptian Christians were kidnapped in the Libyan coastal city of Sirte in two separate incidents in December and January.

Officials said all of them had been killed.

El-Sisi said Egypt reserves the right to retaliate for the killings, according to the state-run website Ahram Online.

"The secretary offered his condolences on behalf of the American people and strongly condemned the despicable act of terror," the State Department said. "Secretary Kerry and Foreign Minister Shoukry agreed to keep in close touch as Egyptians deliberated on a response."

"This wanton killing of innocents is just the most recent of the many vicious acts perpetrated by ISIL-affiliated terrorists against the people of the region," White House press secretary Josh Earnest said in a statement, using an alternative acronym for ISIS.

Members of the U.N. Security Council strongly condemned what they called "the heinous and cowardly apparent murder" of the 21 Egyptians.

"This crime once again demonstrates the brutality of ISIL, which is responsible for thousands of crimes and abuses against people from all faiths, ethnicities and nationalities, and without regard to any basic value of humanity," the U.N. statement said.

Coptic Christians are part of the Orthodox Christian tradition, one of three main traditions under the Christian umbrella, alongside Catholicism and Protestantism. Copts split from other Christians in the fifth century over the definition of the divinity of Jesus Christ.

Copts trace their history to the Apostle Mark, the New Testament figure who they say introduced Christianity to Egypt in A.D. 43. Egypt holds a special place for Coptic Christians because, according to the Gospel of Matthew, Jesus' family fled there shortly after his birth to escape King Herod, who was calling for the execution of all Jewish boys younger than 2.

The largest group of Copts in the world is still in Egypt, where they make up between 8% and 11% of the nation's 80 million citizens, most of whom are Sunni Muslims.