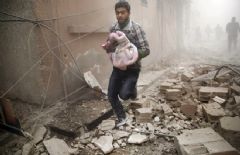 A Syrian man carries a baby wrapped in a blanket following air strikes on the town of Douma in the eastern Ghouta region, a rebel stronghold east of the capital Damascus, on December 13, 2015. (AFP PHOTO / SAMEER AL-DOUMY)

Syrian state media said nine girls had been killed and said "shells fired by terrorists" had hit the government-held area in Deir al-Zor city, the capital of the province of the same name, which is mostly held by ISIS fighters.

The Observatory, which tracks the Syrian conflict using sources on the ground, said the number of dead was likely to rise and said dozens of people had been killed and wounded in months in heavy shelling of Deir al-Zor.

Schools have frequently been a target of violence in Syria. Last week intense air and missile strikes on a school district and other areas in insurgent-held Damascus suburbs killed dozens, according to the Observatory.

On the same day, state media said mortar attacks targeting residential neighborhoods of Damascus had killed three and wounded at least 30 people, most of them students.