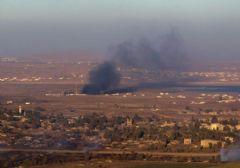 The Israeli Air Force struck a military target belonging to the Islamic State terror group on the Syrian side of the southern Golan Heights overnight Sunday-Monday, the military said in a statement Monday morning.

The raid came after an Israeli airstrike killed four members of an Islamic State-affiliated terrorist group in southern Syria on Sunday morning, following a clash near the border. No Israeli soldiers were injured in the exchange, the army said.

The military said that the additional airstrike Monday was also in response to the attack on Israeli forces on Sunday when, while conducting an "ambush operation," according an Israel Defense Forces spokesperson, soldiers from the Golani Brigade's reconnaissance unit had come under attack from small arms fire after crossing the security fence with Syria while remaining inside Israeli territory. They returned fire, but soon came under attack from mortar shells.

The IDF said Monday that the target in the overnight airstrike was an "abandoned UN building that has been used by the Islamic State as an operations center along the border in the southern Syrian Golan Heights," adding that "the compound was the base for yesterday's attack against IDF forces."

"This is an additional response to yesterday's attack, and it is aimed at preventing the terrorists from returning to the installation which poses a significant threat," the IDF said.

The IDF "will not hesitate to act against terror groups that operate against the State of Israel," the statement added.

In its immediate response to the attack on Sunday, the Israel Air Force targeted a truck "that had some sort of machine gun on top of it" and killed the four terrorists who were riding in it.

"It was a short exchange, but it was productive," IDF spokesperson Lt. Col. Peter Lerner said.

The incident Sunday occurred at approximately 8:30 a.m., east of the Avnei Eitan community in the southern Golan Heights, the army said.

According to the IDF, the four men were members of the Khalid ibn al-Walid Army, formerly known as the Yarmouk Martyrs' Brigade, a terrorist group in Syria that is connected with the Islamic State.

"The army will not tolerate any impairment to its sovereignty and will respond severely to any attempt to damage it," the army said in a statement.

The army would not go into details about the Golani reconnaissance unit's ambush, saying only that it was "planned by operational intelligence."

The incident was the first major confrontation between Israeli forces and Islamic State affiliated terrorists in the Golan, though Israel has clashed with other fighters on the Syrian side of the border several times.

Speaking at a weekly government meeting shortly after the incident, Prime Minister Benjamin Netanyahu promised that Israel "won't allow Islamic State figures or other enemy actors, under the cover of the war in Syria, to set up next to our borders."

Both the IS-affiliated Khalid ibn al-Walid Army and the Jabhat Fateh al-Sham, formerly the al-Nusra Front, which is linked to al-Qaeda, have actually been present on Israel's borders for years, though they and the IDF had maintained a "live and let live" relationship until Sunday.

The Syrian Golan has been the site of intense fighting in recent years between Assad regime forces and the Jabhat Fateh al-Sham, though the front on the border with Israel has been relatively quiet in recent months after seeing intense bouts of violence.

Israeli officials fear Hezbollah and Iran's al-Quds Force, which are allied with Syrian leader Bashar Assad, are aiming at using the area to open a new front against Israel in any future conflict.

Since March 2011, when the war broke out, dozens of mortars have landed in Israeli territory as a result of spillover fighting. The IDF often responds to fire that crosses into Israel by striking Syrian army posts.

Israel maintains a policy of holding Damascus responsible for all fire from Syria into Israel regardless of the source.