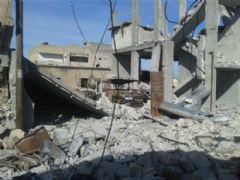 Dead bodies have been booby-trapped and hidden inside rubble. Photo: IRIN Contributor

A new report confirms gruesome allegations that militants from the so-called Islamic State (IS) systematically booby-trapped dead bodies before abandoning the Syrian town of Kobani in January.

Decapitated bodies have been filled with 20 kilogrammes of explosive charges and more than 500 steel ball bearings and rigged to explode at the slightest touch, according to the report from Handicap International (HI).

The lethal, decomposing bodies are not only a macabre spectacle but also present a huge challenge for international demining experts tasked with clearing the city so the predominantly Kurdish residents can return.

Unexploded ordnance, including missiles dropped by American warplanes, is crippling relief efforts in Kobani, which became a symbol of resistance as IS took swathes of Iraq and Syria in the second half of 2014.

For months after the black flag of IS was raised above Kobani in October, Kurdish fighters battled the Islamist extremists street by street and the world got used to seeing images of dark smoke rising above the city's skyline.

With the help of bombing raids by an American-led coalition and reinforcements from Free Syrian Army rebels, the Islamists were eventually forced to withdraw, but not before up to 70 percent of the city had been damaged or destroyed.

The new report from HI concludes that the ferocity of the engagements has left Kobani with a "density and diversity of remnants of war" that has "hardly ever" been seen before. Frederick Maio, who runs HI's demining operations in the city, said it was hard to say how many booby-trapped bodies there were exactly as many had been deliberately buried in the debris.

"What we have to do and what the population have accepted is that they are treating every body as suspicious," he told IRIN. "Whether or not they are booby-trapped, there have been so many accidents that they very rarely touch them."

Between January and early May, 66 people were killed in 45 explosions in Kobani, according to another demining NGO. The vast majority of those killed were civilians.

Maio, who had never witnessed booby-trapped bodies being used as a tactic before, said the problem was likely to hugely slow down efforts to clear all the rubble.

For thousands of residents returning to try and get on with their lives, the sheer scale of the ordnance problem is overwhelming. In the centre of Kobani, there are estimated to be an average of 10 pieces of munition per square metre, while the north and the south of the city also suffered widespread destruction.

Ahmed, a former teacher from Kobani who returned to help rebuild his city in February, gave up two weeks ago and went back to Turkey.

He had been planning to plant crops but said attempts to get farming going again had failed because so many people were being killed or injured by the unexploded ordnance.

"So there is no work for us to do. I had to return to look for work," he told IRIN.

Echoing earlier reports from other demining groups, Maio said efforts to clear the munitions must be accelerated. The most densely populated parts of the city should take priority rather than the areas where there were the largest number of bombs, he added.

Barely four months after IS was driven out of the city, Kobani's residents complain that their plight has been forgotten.

Due to limited funding, Maio said it would be impossible to bring large Western demining operations into Kobani. Instead, they are seeking to train local, civilian teams.