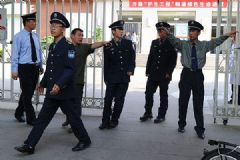 Isolated in a Beijing Hospital, Chen Guangcheng Pleads to Leave China with his Family

A cluster of journalists is crowded around Chaoyang Hospital in Beijing, desperate for a glimpse of blind legal activist Cheng Guangcheng. One of China's most respected activists, Chen made a dramatic emergence from the U.S. Embassy in Beijing on May 2, after spending six days sheltered there by the Americans. A last-minute deal secured an unorthodox solution to one of the world's most sensitive diplomatic incidents in years: Chen, who has been locked up and beaten for years by officials furious that he dared expose a forced sterilization and abortion campaign in eastern Shandong province, would live on Chinese soil so long as the government would guarantee his life in a "safe environment," according to the American side.

But today, he does not feel safe. Chen, who fractured his leg during his April 22 escape from extralegal house arrest, says he is a virtual prisoner in the hospital. "I asked them to take me out in a wheelchair to get sunshine, but they wouldn't agree," Chen told me by phone at 2:30 in the afternoon. "They said, 'no, there are a lot of journalists outside.' I think they don't want me to go outside and meet journalists."

What was supposed to be a successful diplomatic tango between the U.S. and China has turned into a rapid series of missteps that has the potential to make the Americans look less like Chen's saviors and more like handmaidens to his continued misfortune. Shortly after Chen's release, U.S. Secretary of State Hillary Clinton, who had arrived in Beijing that day for high-level economic talks that had been previously scheduled, released a cheery statement: "I am pleased that we were able to facilitate Chen Guangcheng's stay and departure from the U.S. embassy in a way that reflected his choices and our values. Mr. Chen has a number of understandings with the Chinese government about his future, including the opportunity to pursue higher education in a safe environment. Making these commitments a reality is the next crucial task. The United States government and the American people are committed to remaining engaged with Mr. Chen and his family in the days, weeks, and years ahead." Chen had told American officials (and his friends during the period when he had escaped house arrest but had not yet claimed refuge in the U.S. Embassy) that he did not want asylum. Instead, he wanted to ensure the safety of his family and stay in China to continue his advocacy work on behalf of the country's powerless.

On Wednesday afternoon, U.S. Ambassador Gary Locke traveled with Chen the short distance from the U.S. Embassy to Chaoyang Hospital. The Americans-including senior officials Kurt Campbell and Harold Koh, who were in from Washington and helped negotiate a deal-posed for jolly photos with the activist. But as Chen began making phone contact with his friends, lawyer and members of the media, a far different picture emerged. Chen told various people on Wednesday evening that he felt pressure from American officials to make a deal. He maintained that he had been unable to talk to his friends while in the Embassy, implying that he was operating with partial information when making the momentous decision on his future. He had not, as the U.S. had joyfully declared, told Clinton by phone that he wanted to "kiss" her. Instead he had said that he wanted to "see" her.

His wife Yuan Weijing, who traveled with their two children to Beijing to meet him at Chaoyang Hospital, told him of her dreadful treatment by local Shandong thugs after his escape from house arrest in their stone farmhouse. He received news that threats to "beat her to death" had been made against Yuan. By Wednesday night, Chen was scared, upset, and virtually alone apart from his immediate family and an unfamiliar cavalcade of Chinese officialdom. Where were the Americans who had vowed to protect him, he asked foreign media? Why was his family not being given food at the hospital, to the point where one of his children was crying from hunger?

By the time of our Thursday afternoon phone conversation, Chen was pessimistic about his future: "I'm worried that my rights are not guaranteed," he told my colleague Chengcheng Jiang and me by phone. "I'm worried about my personal freedom. I haven't seen any of my friends at all. The Chinese side has already broken part of its promise." Earlier, Chen told my other colleague Jessie Jiang by phone: "I now want my whole family to leave as soon as possible."

During our conversation, Chen displayed less discomfort toward the Americans, with whom he had talked by phone earlier on Thursday. According to Chen, U.S. officials said that they had tried to see him on Wednesday evening but that Chinese officials (he said from the Ministry of Foreign Affairs, although it's not clear whether he specifically meant Chinese diplomats or was using that designation as a shorthand for Chinese officials in general) would not give them access. "I was very unhappy at the time [last night]," he said, "But now I realize that they weren't allowed in to see me." By Thursday afternoon, Chen said he had still not been able to meet face-to-face with American officials and that again they had tried to see him earlier in the day but had been stopped by Chinese forces. Outside Chaoyang Hospital on Thursday, police and other official vehicles idled, along with an American Embassy car.

When I first met Chen in 2005, he was already nervous about the extent to which local Shandong officials were going to stop him from his legal work. His voice shook as he described evading thugs who had tried to stop him from visiting Shanghai and Beijing, where he wanted to advocate on behalf of women who had been forced to undergo horrific procedures on the behest of misguided local family planning officials. One woman I spoke to with Chen's help had been strapped down two days before her due date; local officials injected a syringe in her abdomen and killed her baby. At times, during our meetings, he blinked back tears. After one of our meetings in Beijing in September 2005, Chen was bundled away by Shandong officials who came to the capital to pick him up. Since that time, he was either in jail (on trumped-up charges of "disturbing traffic" and "destroying property") or under extra-legal house arrest.

But his nerves aside, Chen was also determined to use the legal system, which he believed held sanctity in China, to fight on behalf of these women. Jerome Cohen, a Chinese legal expert based in New York who was one of the few non-government people in contact with Chen during his Embassy stay, said during a Council on Foreign Relations-sponsored conference call on Wednesday that Chen had seemed "fearful" and "insecure" when they talked two days before. (By Tuesday, however, Cohen said Chen had appeared calmer.)

On Thursday, when we spoke by phone, Chen's demeanor was calm, if tired. His voice did not shake. But the playful quality in his soft-spoken voice was gone, understandable given the horrific treatment he has endured over the past seven years-and the stress of recent hours. Back in 2005, Chen asked to see what I looked like and brushed his fingers on my face. He told me that my nose wasn't too big-for a foreigner's. He said brown hair didn't feel that different from black locks. Those of us who have met him know what a special man he is. Ambassador Locke praised Chen's character after his release.

The question now is whether the Americans, by either naÃ¯vetÃ© or otherwise, have left him to an uncertain fate by taking the Chinese at their word in their commitment to his safety and well-being. Will Chen really be allowed to go to university to study law? Will his friends be allowed to see him? What about his family members in Shandong who are still missing? Will he be bundled off by Chinese security agents when Clinton departs? Or will Chen's now desperate pleas for asylum in America somehow be met? There are many questions. And so far, precious few answers, as Chen sits in a hospital with his wife and children, isolated from the world he so hoped to rejoin.