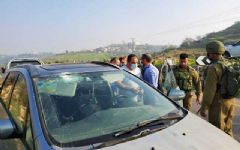 The scene of a rock attack in the West Bank

A woman in her 40s was seriously injured near the West Bank settlement of Neve Tzuf on Sunday afternoon after rocks were thrown at her car.

The army said in a statement that "a civilian was injured as a result of stone-throwing near the village of Deir Deir Nidham."

Israel Defense Forces were "in pursuit of the suspects," the statement added.

Hebrew-language media reports said IDF troops were encircling the nearby Palestinian village of Deir Nidham in an attempt to apprehend the suspects.

The Magen David Adom ambulance service said medics treated the injured driver, who was conscious, before taking her to Sheba Medical Center in Ramat Gan for treatment for a head injury.

Reports said two of the woman's children were in the car at the time of the attack but were unharmed.

The Kan public broadcaster named the victim as Rivka Tytell, wife of Jewish terrorist Jack Tytell, who was convicted in 2013 for a string of nationalistically motivated murders and terror attacks spanning a decade.

Jack Tytell is serving two life sentences and an additional 30 years in prison for murdering two Palestinians, two other attempted murders, placing a bomb next to now-deceased far-left academic Zev Sternhell, and other offenses.

Sunday's rock-throwing incident came amid a period of heightened tensions in the West Bank.

Last month, Israeli settler Esther Horgen, was found dead in a northern West Bank forest where she had gone for a run.

The Israeli security services reported 13 incidents of stone-throwing by settlers against Palestinians in the days immediately following Horgen's murder, including an incident in which a 16-year-old, Ahuvia Sandak, was killed in a car crash during a police chase after allegedly hurling rocks.

Additionally, an unarmed Palestinian man, Haroun Abu Aram, was left paralyzed from the neck down Friday after being shot at close range by Israeli forces during an operation to confiscate illegal Palestinian construction equipment in the West Bank's South Hebron Hills.