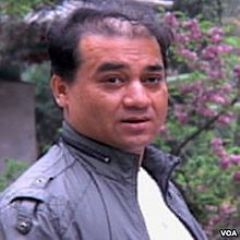 "My father is a fixer, a bridge-builder, a connector. He knows that a better future is one where Han Chinese and Uighur children are in school together, are friends together and have the same opportunities," said Jewher Ilham, who pleaded for the release of her father, prominent jailed Uighur scholar and economist Ilham Tohti.

She also petitioned Chinese authorities to release all Uighur girls from so-called re-education camps before Beijing hosts the 2022 Winter Olympics.

Tohti has been serving a life sentence on separatism-related charges since 2014. Chinese authorities accused him of encouraging terrorism and advocating separatism in his lectures, articles and comments to foreign media.

The scholar and economist founded the website Uyghur Online, which is aimed at promoting understanding between Uighurs and Han Chinese. He also has been outspoken about Beijing's treatment of the minority Muslim Uighurs in the far-western Xinjiang region.

"I have not spoken to him since 2014, and I have not seen him since we were separated at the airport in 2013. We were on our way to Indiana University, where my father was supposed to start a yearlong residency," Jewher Ilham told participants of the second annual Ministerial to Advance Religious Freedom, hosted by the U.S. State Department on Tuesday.

The appeal came amid a renewed push from American lawmakers urging China to change how it treats Uighurs in Xinjiang.

"The violations [in Xinjiang] are of such scale, are so big, and the commercial interests are so significant that it sometimes tempers our values in terms of how we should act," said Nancy Pelosi, speaker of the U.S. House of Representatives, said Tuesday at the ministerial.

"Unless we are willing to speak out against the violations of religious freedom in China, we lose all moral authority to talk about it any other place in the world," added Pelosi.

The House speaker also called for U.S. sanctions against Chinese Communist Party leaders in Xinjiang, who are responsible for the re-education camps.

More than 1 million Muslim Uighurs have been detained in re-education camps that critics say are aimed at destroying indigenous culture and religious beliefs.

In January 2019, Tohti was nominated by a bipartisan group of U.S. lawmakers for the Nobel Peace Prize.

"Ilham Tohti is convicted of dismembering the nation. What he did was meant to split the country, stoke hatred and justify violence and terrorism, which cannot be condoned in any country. The international community should have a clear understanding of this," Chinese Foreign Ministry spokesman Geng Shuang said this year.