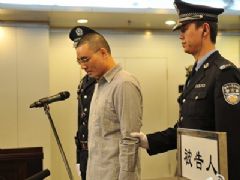 Qin Zhihui, a self-confessed "rumour monger", was led away from court on Thursday to serve a three-year sentence for spreading "lies, smear campaigns and fibs" across the Chinese internet.

Mr Qin accepted the verdict, telling the court: "I hope my behaviour can warn others, not to do stupid things as I did."

On the same day, the platform he used to achieve his notoriety, microblogging site Sina Weibo, received a different kind of punishment â from financial markets. The launch of its initial public offering, listing on the Nasdaq stock exchange, achieved a valuation of just $3.8bn, much reduced from earlier ambitions of $7bn-$8bn in March.

While analysts attributed this mainly to a recent slump in tech stocks, the pessimism surrounding Sina Weibo's future in China has deeper roots and coincides with a political crackdown on internet freedom since the coming to power of President Xi Jinping. Some analysts even refer to the halved IPO price expectations as a "censorship discount".

Punishments such as Mr Qin's, meted out to China's bloggers in the wake of a crackdown last autumn, have sent a chill through the microblogging industry, which is now creating a backlash for its business model. Many analysts increasingly refer to the period of 2011-13, the boom years for Sina Weibo, as "the Weibo era" and refer to it in the past tense.

Combined with the rise of competitor WeChat, an instant messaging app that is a more private way to express views than Weibo, pervasive censorship is pushing people out of microblogs.

"Censorship has created a climate of fear on Weibo, people are more reluctant to use it now," said Zhang Lifan, a university professor and blogger whose account was deleted in November. "If your account has not been deleted you are not a fully qualified Weibo user," he jokes.

"Because of illegal deeds I committed on Weibo, I lost freedom, my job, the chance to be with families and friends and the joy to roam on the internet world. I hope I wouldn't see a second person experience the same pain of loss as I did."

After a boom in which usage hit 500m registered users in the summer of 2012, surveys have found user engagement is declining, although the company insists usage is growing, if less rapidly than before.

Most bloggers connect the new climate to the rise of Mr Xi, who took over as head of the Communist party in November 2012. In September 2013, the supreme court announced toughened controls on internet "rumour mongering". This meant people could be jailed for tweeting a "rumour" that was retweeted 500 times.

Michael Anti, a Chinese journalist, says that under Hu Jintao, the previous Chinese president, the Communist party tolerated bloggers as long as they confined their wrath to local officials. "It was a way to control the provinces," he said. But after Mr Xi came to power the mood changed.

"The new attitude is that if you attack any officials you attack the whole Communist party," Mr Anti said.

Hu Jia, a blogger who has spent the past two months under house arrest, believes the reason for the change is twofold. Mr Xi is "more heavy on ideology" than his predecessor was, he says, but also the microblogs, lead by Sina Weibo, were getting too powerful.

"This is exactly what the Communist party most dreaded, losing the monopoly on the spread of information," says Mr Hu.

Sina Weibo has little choice but to co-operate with the authorities, the company employs a vast army of censors who delete offensive posts, despite the threat that such excessive censorship poses to its business model.

The authorities have sought to showcase Mr Qin's trial as symbolising the excesses of the Weibo era. Mr Qin is known in the industry for commanding "water armies", which are masses of bloggers and bots â applications that run automated tasks over the internet â that create publicity on the internet for a fee.

The sentence on Thursday was the end to what some see as an obviously scripted show trial: at the reading of the guilty verdict last week, Mr Qin thanked China's law enforcement agencies, his prison guards, his parents, journalists and Sina Weibo, in what reminded one blogger of "an award acceptance speech".

"Because of illegal deeds I committed on Weibo, I lost freedom, my job, the chance to be with families and friends and the joy to roam on the internet world. I hope I wouldn't see a second person experience the same pain of loss as I did," he said.

Charles Xue, a Weibo user with 12m followers, who was arrested for soliciting prostitutes last August in what many believe was a set up, was treated more leniently and was released on Wednesday.

Sina Weibo denies censorship has had any impact on usage and insists it will continue to root out what it calls "malicious content".

Indeed, anyone wanting to pontificate about the effect of censorship on China's microblogging industry couldn't do it on Weibo on Thursday: a keyword search of the website for "Weibo" and "censorship" returned a server error.