U.N. Inaction on Jordan
All Actions of the UN Human Rights System Critical of Specific States, 2017 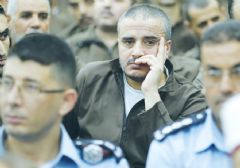 Ahmad Daqamseh, the Jordanian soldier convicted of killing seven Israeli schoolgirls 20 years ago, was released from prison on Sunday to a warm welcome from much of Jordanian society.

Wary that there would be an embarrassing show of popular support for Daqamseh, authorities released him after midnight on Saturday rather than on Monday, as had previously been expected.

But despite the surprise, supporters gathered quickly in his home village of Ibdir, in northern Jordan.

Daqamseh was found guilty of opening fire at a group of 80 seventh- and eighth-graders from the AMIT Fuerst School in Beit Shemesh in 1997, during an outing at the joint Israeli-Jordanian tourist resort Island of Peace in Naharayim. Seven of the girls were killed, while another six were wounded.

A video of Daqamseh in a vehicle approaching his home showed him surrounded by well-wishers clapping and shouting a religious chant: "Pray for the prophet."

To amp up the festivities, the well-wishers then began singing the words to a wedding song: "Blessed Muhammad, shame on you Satan," followed by more chants of "this is the hero here."

But soon afterward, in an interview with Al Jazeera in which he was unshaven and wore tinted glasses, he turned his attention to Israel, and it was clear that in his view it simply should not exist.

Daqamseh, who never voiced remorse over the massacre, said: "I would like to send a message to the Jordanian people. Don't believe the lie of normalization with the Zionist entity. Don't believe the lie of the two-state solution. Palestine is one country, from the sea to the river and from Ras Naqura [Rosh Hanikra] to Umm Rashrash [Eilat]. They falsified the names of the cities. Unfortunately, there are many Muslims who brag and talk about the State of Israel. There will never be a State of Israel."

Daqamseh's release was a wrenching spectacle for Israelis, considering he would have killed even more children had his weapon not become jammed. Daqamseh, now 46, would have been liable for execution, except that he was found to be mentally unstable and so was given a life sentence that is the equivalent of 20 years under Jordanian law. A few days after the killings, King Hussein traveled to Israel and beseeched the forgiveness of the bereaved families on behalf of all Jordanians.

But especially over the last decade, alongside heightened animosity towards Israel, calls mounted to release Daqamseh. In 2008, 70 prominent personalities signed a petition asking King Abdullah to pardon him. In 2011, then-justice minister Hussein Majali termed him a hero and called for his release, although the statement was repudiated by the Foreign Ministry.

In 2014, parliament voted by majority that he should be released.

Larger and larger segments of Jordan's population were buying into a view that what he did was heroic, understandable or at least had extenuating circumstances. At his trial, Daqamseh said he opened fire after Israeli girls mocked him while he was performing his prayers. This was taken up in Sunday's coverage of the release in ad-Dustour, which closed a short article by stating this claim as if it were a fact: "It is remembered that the soldier Daqamseh opened fire on a group of Israeli girls because of their mocking him during his prayers near Baqura in 1997."

But while ad-Dustour did not praise Daqamseh, he was lionized on Facebook and by some prominent personalities, including member of parliament Muslih al-Tarawneh, who said: "Ahmad is our groom today and every day. He has finished his sentence. Let him live in peace. He is not a stranger. He is the owner of the land and the country, and the heart of the country belongs to him."

On Facebook, most of the posts were effusive, but there were also some who went against the tide and voiced revulsion at seeing a child killer glorified.

Intellectual Basel Rafayeh wrote: "There is no heroism in killing children and I hope that he is not fooled by the popular support and the handicapped opposition, which believed that the children made fun of his prayers. The court convicted him and believed he has a mental problem. Case closed."

However, for Facebook user Talaat Shuaibat, it was a day of celebration.

"Jordanians have the right to celebrate the liberation of one city from occupation â its name is Ahmad Daqamseh."

"May God protect him from the Zionists and the criminal agents," wrote Mohammed Farid.

Someone writing under the name Zein Srour wrote in one post: "The group that is praising him will bring us backwards." After another user responded to his post by calling Daqamseh "the lord of the heroes," Srour stuck to his guns: "If we are not humans, we are animals." He later wrote: "He killed Jewish children. Our religion doesn't say to kill people."

In the Knesset, MK Jackie Levy (Likud) expressed his disappointment that Daqamseh was released and did not stay in prison for the rest of his life. "It is sad and painful that a despicable murderer who conducted a brutal massacre returned home to a normal life. This terrorist should have spent the rest of his life behind bars."