U.N. Inaction on Jordan
All Actions of the UN Human Rights System Critical of Specific States, 2016 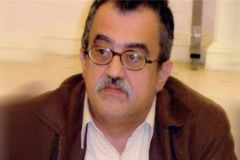 A Jordanian writer was shot dead as he entered the country's highest court to stand trial for allegedly offending Islam.

A suspect was arrested in the killing of Nahed Hattar outside the Palace of Justice in Amman, state-run Petra news agency reported.

Hattar was taken into custody in August after republishing a cartoon on his Facebook page that showed a bearded man in heaven in bed with two women, smoking and asking God to fetch him wine and nuts. Hattar, a Christian, later apologized and said the cartoon mocked the kind of God the militant Islamic State group believes in.

Depicting God, or the Prophet Muhammad, in Muslim societies is taboo. The 2005 publication in Denmark of a cartoon drawing of the Prophet with a bomb in his turban inflamed sometimes violent outrage across the Islamic world.

Hattar was entering the court to be tried on charges of inciting to racism and sectarianism and offending religious sensibilities.