U.N. Inaction on Kuwait
All Actions of the UN Human Rights System Critical of Specific States, 2018 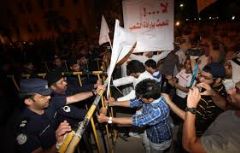 Kuwait's highest court on Sunday ordered an opposition leader and two lawmakers imprisoned for 3 Â½ years over the 2011 storming of parliament amid that year's Arab Spring protests, in a case involving nearly 70 politicians, activists and others.

Over a dozen people received prison time in the ruling by Kuwait's Court of Cassation, while the others were released on bail or found not guilty.

Tiny, oil-rich Kuwait, which has a history of representational government and toleration for protests, has been caught up in a wider crackdown on dissent across the Gulf Arab states, whose monarchical rulers were alarmed by the pro-democracy protests that swept the region seven years ago.

Sheikh Sabah Al Ahmad Al Sabah, the ruling emir of the U.S.-allied nation, has said Kuwait must "protect our national unity and ward off the risks of sedition."

The defendants were initially acquitted in the yearslong case, but a shock court decision in November resurrected the charges against them. That decision accused the defendants of using violence against police officers, destroying government property and inciting violence, charges they long have denied.

Among those sentenced Sunday to 3Â½ years was Musallam al-Barrack, an opposition leader who left prison in April 2017 after serving a two-year sentence on separate charges.

Al-Barrack had left Kuwait before the sentencing. He could not be immediately reached for comment.

In a bid to insulate Kuwait from the unrest elsewhere in the region in 2011, the emir ordered 1,000 dinar ($3,559) grants and free food coupons for every Kuwaiti. That came on top of Kuwait's cradle-to-grave entitlements for it citizens, which the OPEC member is able to afford because it holds the world's sixth-largest known oil reserves - despite being smaller than the U.S. state of New Jersey.

Allegations swirled at the time that some lawmakers had been bribed $350 million by the government to sway their votes, along with rumors that they were involved in embezzling state funds. Kuwait's then-Prime Minister Sheikh Nasser Mohammed Al Sabah, Sheikh Sabah's nephew, who also faced allegations, survived a no-confidence vote.

Amid strikes and confrontations with police, protesters briefly entered parliament on Nov. 16, 2011, waving flags and singing the country's national anthem.

The activists were initially charged after the storming of the parliament but a lower court in 2013 ruled they had no criminal intent during the incident. However, a surprise appeals court ruling last November sentenced dozens of defendants to prison terms of as much as nine years.

Since then, family members of those charged have held regular nightly protests in front of parliament. While anti-government protests are illegal across other Gulf Arab states, Kuwait has stood out among its neighbors for its representational politics dating back to the 1930s, making the court case that much more surprising.