U.N. Inaction on Zimbabwe
All Actions of the UN Human Rights System Critical of Specific States, 2006 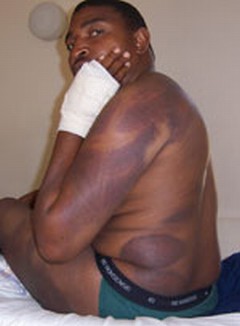 Toendepi Shonhe in hospital in Harare with a broken hand and bruising still livid five days after the assault
Source: Times Online

"An alliance of independent human rights groups yesterday demanded the immediate prosecution of police and soldiers who allegedly assaulted and injured labour leaders attempting to stage antigovernment protest marches across the country. The Zimbabwe Human Rights Forum said torture in the troubled southern African nation was "both widespread and systematic" as evidenced by what it called the savage ill-treatment of the main labour federation's leaders while in custody after they were arrested in Harare on Wednesday... Wellington Chibebe, the federation secretary-general, suffered a broken arm, hand and severe head injuries... [he] told human rights campaigners the activists held at Matapi were taken into cells in pairs where they were beaten by police and attackers who he thought - from the language they used - to be soldiers. Lovemore Matombo, the head of the opposition-allied labour federation, suffered head injuries and a broken finger... The government has made no comment on the assaults which have been condemned by western states."