U.N. Inaction on China
All Actions of the UN Human Rights System Critical of Specific States, 2017 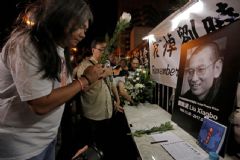 Imprisoned for the last eight years of his life, his name erased from Chinese news reports and public records,Â Liu XiaoboÂ was a deliberately silenced man. But the Nobel Peace Prize laureate's death from liver cancer Thursday only intensified the public outcry over the causes he devoted his life to, as scholars, activists and governments around the world condemnedÂ BeijingÂ for its treatment of the 61-year-old dissident.

U.S. lawmakers, human rights groups and democracy activists inÂ ChinaÂ itself all weighed in onÂ Mr. Liu's death,Â China's most famous political prisoner who succumbed quickly to his disease just weeks after his release from prison. The death also comes as the government of President Xi Jinping has made a conscious effort to boostÂ China's "soft power" with such initiatives as the One Belt, One Road program and the new Asian Infrastructure Investment Bank.

"There should be an independent investigation into the circumstances surroundingÂ Dr. Liu's death, his treatment in detention, the timing of the diagnosis of his late-stage liver cancer, and countless other questions that need to be answered," the Florida Republican said in a statement. "The Chinese authorities complicit in his unjust imprisonment and death should be immediately sanctioned and their assets frozen under" U.S. laws, he said.

President Trump, in a White House statement released Thursday evening, said he was "deeply saddened" byÂ Mr. Liu's death, calling him a "political prisoner" who "dedicated his life to the pursuit of democracy and liberty."

Mr. Trump did not directly refer toÂ China's treatment ofÂ Mr. Liu, but the White House earlier this week had called onÂ BeijingÂ to end the confinement for bothÂ Mr. LiuÂ and his wife, so the ailing dissident could pursue the medical care of his choosing.Â