U.N. Inaction on United Kingdom of Great Britain and Northern Ireland
All Actions of the UN Human Rights System Critical of Specific States, 2015 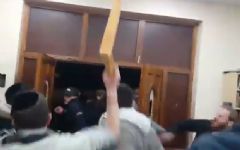 Jews pushing back against attackers

A drunken mob of more than 20 thugs shouted "kill the Jews" as they stormed into a north London synagogue while young worshippers celebrated the end of the sabbath.

The anti-Semitic abuse was hurled by the group of men and women as they first beat up a young man outside before chasing him inside, breaking windows and attacking others.

Part of the chaotic incident in Stamford Hill was captured on video before the intruders were beaten back as the worshippers grabbed chairs to protect themselves.

Synagogue elders, including Rabbi Maurice Davis, are convinced the attack was not religiously motivated and was merely a typical example of anti-social behaviour.

Young people were gathered together inside the Ahavas Torah synagogue when more than 20 partygoers tried to force their way into the building around 1.15am on Sunday.

They had attacked a Jewish youth outside and, when he took refuge inside the synagogue, they chased after him and attacked some of the boys inside.

Scotland Yard are treating the incident as an anti-Semitic attack, while some of the victims and their friends are fearful of further violence.

Meir Taub, who is a member of the local Shomrim, a Jewish patrol designed to crack down on violence against Jews, said he was called to the incident shortly after it began and was the first to call the police.

He said: "I came down and there was a huge group of people, men and women, trying to force their way into the synagogue.

"The window had already been smashed. Teenagers were shouting abuse. It was blatantly anti-Semitic, they came and attacked a synagogue."

Mr Taub added: "I was on the phone to the police all the time, I didn't interfere but others did. The number of these incidents has increased in the past few months, since before Charlie Hebdo. We're stepping up patrols and working with the police. The courts should take attacks like this seriously.

"I have clear footage which I'm going to show to the police, which clearly shows there were anti-Semitic chants."

A Scotland Yard spokesman said: "The disturbance began when a group of drunk males, believed to have walked to the area from a house party nearby, tried to gain access to the synagogue.

"One man was injured as he sought to prevent the group from entering the building. He sustained facial injuries, not believed to be serious, and was taken to hospital for treatment.

"A small number of the group did briefly gain entry to the synagogue before being removed by security staff."

He added: "The incident is being treated as an anti-Semitic incident, due to remarks made by one of the group. However there is nothing to suggest that it was a planned or targeted attack.

"Six males were arrested for public order offences and assault. All were taken to a north London police station where they remain in custody."

Inspector Jonathan Waterfield said: "We are investigating to establish the full circumstances of the incident and to identify anyone else involved in the disturbance who has not yet been arrested.

"We have also increased police patrols in the Stamford Hill area to provide reassurance to the community."