U.N. Inaction on Myanmar
All Actions of the UN Human Rights System Critical of Specific States, 2008 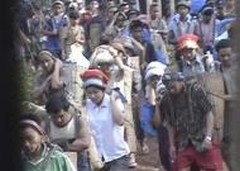 "In this undated photo released by Free Burma Ranger, a group of forced porters carrying goods for Myanmar soldiers pass through a village in Karen state, Myanmar. Myanmar's army has moved reinforcements into ethnic minority areas for the probable renewal of an offensive whose past human rights violations were far greater than those against urban protesters, aid and rebel groups say."
Source: AP Photo/Free Burma Ranger

Myanmar Cracks Down on Ethnic Minorities

MAE SARIANG, Thailand- "Myanmar's army has moved reinforcements into ethnic minority areas for the probable renewal of an offensive whose past human rights violations have been far greater than those against urban protesters that riveted world attention last fall, aid and rebel groups say.

The groups provide continuing reports of killings of civilians, rapes, forced labor, burning of crops and mass relocations as Myanmar troops attempt to wipe out die-hard guerrillas of the Karen National Union and other ethnic rebel forces.

While urban tensions may have eased since the crackdown on September's pro-democracy demonstrations in Yangon, "nothing has changed" regarding the conflict in the east of the country also known as Burma, says Htoo Kli, who helps Karen refugees along the Thai-Myanmar border.

The Thailand Burma Border Consortium, the key aid agency along the frontier for more than two decades, says that in 2007 another 76,000 Karen were forced to flee their homes and at least 167 villages were destroyed.

Corroborated by high-resolution commercial satellite imagery, more the 3,000 villages have been laid waste to by the army in recent years while those displaced in eastern Myanmar number at least half a million, the agency says.

"People around the world were horrified when they saw soldiers beating some people in Yangon, but far worse happens in the countryside every day, hidden from the world," said the consortium's Executive Director, Jack Dunford.

The Karen say they are bracing for another onslaught early in the year, noting that supplies are now being sent to front-line government bases along roads being repaired after the monsoon rains.

The Free Burma Rangers, a private aid group, report from inside the country that at least 10 divisions, up to 15,000 troops, are positioned in northern Karen State and southern Karenni State - up from nine divisions at the height of operations over the past year. Large numbers of troops are deployed across other areas of eastern Myanmar.

Dry season offensives have taken place almost every year since 1984, when the Karen and other groups began to lose control over large swaths of territory.

Despite a remarkable tenacity - the Karen have been fighting for autonomy from the central government since 1949 - their forces have withered in recent years. They are lacking weapons and are down to no more than 5,000 fighters, according to KNU spokesman David Thaw, and they face a Chinese-equipped military of some 400,000.

"When you talk about the KNU and the Burmese army there is a big gap. The Burma Army occupies more and more, and the KNU have less and less," acknowledged Htoo Kli, head of Karen Office of Relief and Development, who fled Myanmar in 1984.

Dunford said that the army starts off better positioned at the onset of each dry season, and that "endgame for the ethnics" is approaching. "After the next five years I can't imagine anything will be left," he said.

The Free Burma Rangers, who include foreign and ethnic-minority staffers helping those who have fled their homes, say the coming push probably won't yet attempt a knockout blow.

It rather will focus on building more roads, improving military camps and keeping the guerrillas off-balance as the government attempts to better secure the area's timber, minerals, potential hydropower and land for plantations.

The military junta has repeatedly denied attacking civilians or committing atrocities, saying it is only hunting down terrorists trying to destabilize the country.

Although often called a "hidden war," and indeed out of range of most international media, a sizable body of documentation by human rights groups, the United Nations and others has been compiled. But activists say it has elicited minimal international response.

Dunford said the conflict lacks the drama of thousands of protesters confronting the military on the streets of Yangon, and people on the outside identify with the urban protesters, not the ethnic groups in their remote jungle huts. "There is a total disconnect," he said."