U.N. Inaction on Myanmar
All Actions of the UN Human Rights System Critical of Specific States, 2010 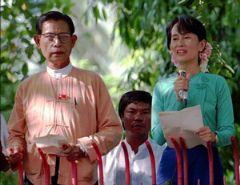 The judgment came as special U.N. envoy Tomas Ojea Quintana arrived for a five-day visit to evaluate progress on reform.

"Human rights abuses in the country continue unabated even during the visit of the human rights envoy," Nyan Win said.

"Ethnic minorities play an important but seldom acknowledged role in Myanmar's political opposition," Amnesty said. "The government has responded to this activism in a heavy-handed manner, raising fears that repression will intensify before the elections."

The government has repeatedly denied such accusations, saying that it was only carrying out anti-terrorist operations against some ethnic minorities fighting the central regime.

Quintana's third visit follows the release from almost seven years of detention of the deputy leader of the pro-democracy party led by Suu Kyi. The envoy left Tuesday morning for northwestern Rakhine State and will visit a prison in northern Rakhine state on Wednesday.

During a meeting with the envoy Monday, Nyan Win briefed Quintana about the inconsistencies of the judicial system in Myanmar, arbitrary detentions and the trials of Suu Kyi and a Myanmar-born American who was recently sentenced for forging documents and undeclared foreign currency.

"I told Mr. Quintana that we inherited the judicial system from colonial times but that it has rusted," Nyan Win said.

He said judges often handed down the maximum possible sentences to political activists.

"Persecution of activists has intensified and many activists have been unjustly sentenced," he said.

Nyan Win said that Nyi Nyi Aung, the Myanmar-born American who was sentenced last week to three years imprisonment with hard labor, was moved from Yangon to a prison in Pyi, 150 miles (240 kilometers) to the north.

"Sending the activists to far away prisons caused extreme inconvenience to the families. It is like double punishment," said Nyan Win, who is also a defense lawyer for Nyi Nyi Aung.

Quintana said in a statement last week that it would be important to meet with political party leaders in the context of this year's landmark elections, which he described as "a critical time" for the people of Myanmar.

No date has yet been announced for the polls which are billed as moving the country toward civilian democracy.

The envoy also has requested a meeting with Suu Kyi, who remains under house arrest. He was barred from seeing her on his previous visits.