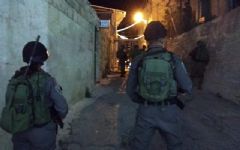 A Palestinian man tried to stab an Israeli policeman outside Hebron's Tomb of the Patriarchs and was shot and wounded by the officers early Wednesday, police said.

The suspected attacker, 22, was hit in the leg and was moderately wounded, police said. There were no injuries to the Border Police force.

The shrine, revered as the final resting place of most of the Biblical patriarchs and matriarchs, is one of the holiest sites in Judaism and is also revered by Muslims as the Ibrahimi Mosque.

The flashpoint West Bank city of Hebron, where Palestinians live in close proximity to settlers who are guarded by Israeli troops, has been the scene of numerous stabbings and attempted stabbings.

The incident came hours after a Palestinian man was arrested Tuesday on suspicion of trying to stab Israeli guards with a screwdriver at a West Bank crossing.

The suspect, a 51-year-old from Nablus, arrived by foot at the Qalandiya checkpoint north of Jerusalem, but didn't have a permit to enter Israel, according to police.

After being denied entry, the suspect pulled out a screwdriver and tried to attack one of the guards, police said.

He was taken in for questioning after his arrest.

One of the guards suffered a light scratch to his neck, according to the Walla news site.

The incidents came amid an uptick in violence in the West Bank in recent weeks, including a deadly terror attack in which an Israeli woman was murdered, numerous cases of Palestinians throwing rocks at Israeli cars, and several attacks by Israeli settlers against Palestinian civilians and Israeli security forces.