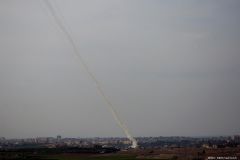 Palestinian terrorists in the Gaza Strip fired two rockets toward the southern Israeli city of Ashdod before dawn on Monday, which landed in the sea just off the coast of the city, the army said.

The projectiles did not trigger warning sirens, the Israel Defense Forces said. There were no injuries or damage reported.

In response to the rocket fire, the Israeli military said, its fighter jets bombed sites where the Hamas terror group is digging underground tunnels in southern Gaza.

Though it was not immediately clear which terror group in the Strip fired the rockets, the IDF said the Hamas terror group was ultimately responsible as it is the de facto ruler of the Palestinian enclave.

The rocket launches came after a period of relative quiet on the Gaza border.

In late December, Hamas and other Gaza terror groups held a joint military drill during which several rockets were fired toward the sea, in an effort to send a "clear message to the Zionist enemy."

On the eve of the drill, Palestinians attempted to fire a projectile into Israel, but it failed to cross the Gaza border.

That came two days after two rockets fired from Gaza struck open areas along the coast - one near Ashdod and the other on Palmachim Beach, south of Tel Aviv - causing no significant damage or injuries.

Soldiers operating the Iron Dome air defense system attempted to shoot down the rocket fired toward Palmachim Beach, firing at least two interceptor missiles at the projectile, but did not bring it down. Fragments of an interceptor missile landed in the nearby city of Bat Yam, causing minor damage.

That rocket fire came days after the one-year anniversary of the killing of Palestinian Islamic Jihad commander Baha Abu al-Ata.

Hamas has ruled the Gaza Strip since 2007, when it expelled its rival Fatah following a bloody struggle for control of the coastal enclave. Israel has fought three large campaigns against terror groups in the Strip since Hamas took control of the area, along with dozens of smaller exchanges of fire.