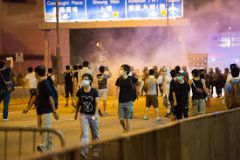 Hong Kong's decision to bar 12 pro-democracy candidates from standing for office sets a sweeping precedent and may signal the end of meaningful political opposition in the city.

The group disqualified from contesting upcoming elections to the city's legislative council include the prominent student activist Joshua Wong but also moderates and four incumbents, such as Alvin Yeung, who represents Hong Kong's accountants.

More radical candidates have been barred from running before, and others prevented from taking office after winning. But the latest rulings suggest authorities even want to eliminate tempered dissent from the halls of power. Many had been selected in primary elections that drew hundreds of thousands of voters.

"Clearly the Chinese Communist party decided to take this opportunity of the upcoming election to show Hong Kong people and the rest of the world that they have redesigned the whole game," said Kenneth Chan Ka-lok, a political scientist at the Hong Kong Baptist University, and former pro-democracy lawmaker.

"It is no longer one country, two systems," he said, referring to the system agreed ahead of Hong Kong's handover from British colonial rule, that was meant to guarantee the city substantial autonomy until 2047. "If the regime cannot even stand the moderates ... we are moving very rapidly towards a one-party system in Hong Kong."

The disqualifications were made by low-level returning officers but likely sanctioned at much higher levels, said Kai Chi Leung, a lecturer at the Chinese University of Hong Kong's school of journalism and communication.

"In last year's district council election we actually had a returning officer who was unwilling to disqualify a candidate and had to ask for sick leave so that another person could take her place (and sign the disqualification paper)," she said.

"It is likely that steps have been taken for the selection of returning officers this round so that such an embarrassing situation would not happen again."

Reasons given for the bans included opposition to the controversial national security law that Beijing brought into the city last month, and efforts to lobby foreign governments for sanctions over human rights abuses.

Those campaigns came before the national security law was in force. But in a disturbing indication of how broadly authorities may apply it, a returning officer said previously legal conduct gave an insight into candidates' "true intentions", which led to them being disbarred.

"This is an outrageous political purge of Hong Kong's democrats," Chris Patten, the last British governor of Hong Kong, said in a statement. "It is obviously now illegal to believe in democracy ... this is the sort of behaviour that you would expect in a police state."

There is little room for appeal; previous attempts to overturn disqualification succeeded only on technical grounds, and authorities will have followed procedure carefully this year. The disqualifications come in the same week a prominent tenured professor was dismissed for his pro-democracy campaigning, and the arrest of four young activists who are facing life in jail under the national security law.

There are also reports the election could be delayed, leaving more room for authorities to effectively dismantle the political system that has given Hong Kong a limited form of democracy and autonomy for 23 years.

"It could spell the end of opposition inside the system, for the election laws could be entirely rewritten to make it impossible or irrelevant for the opposition to run again," Leung said.