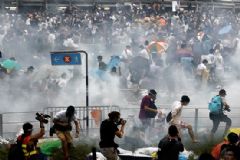 Police used pepper spray and tear gas to disperse pro-democracy protesters in the city's most serious confrontation with Beijing in more than a decade.

Roads were blocked and some schools and offices were closed Monday morning as protests spread to other neighborhoods in the city. Police stopped using tear gas late in the night and tried negotiating with protesters but crowds remained in several locations.

The protests showed signs of affecting Hong Kong's financial industry as banks closed branches in the affected areas and the Hong Kong Monetary Authority, the city's de facto central bank, activated its own contingency plan and was ready to inject liquidity into the banking system. Markets opened as normal with the Hang Seng Index falling1.3% at the start of trading.

The Hong Kong government said Monday morning that riot police were withdrawn after peace was restored among protesters.

The escalation of the protests-centered on Beijing's decision to impose limits on how Hong Kong elects its leader-threatens to strain relations with Beijing which controls Hong Kong under an arrangement called one country, two systems. Beijing has taken a hard line over the brewing dispute over democracy in Hong Kong, issuing warnings to protest organizers and pushing business leaders to support its stance, allowing universal suffrage but only allowing people to vote for preapproved candidates.

The protests were largely driven by university students who boycotted classes last week and stepped up their confrontation with authorities over the weekend. It has exposed a deep generational and economic divide in the city, and is poised to shape its relationship with mainland China for years to come.

The protests appeared to invigorate pro-democracy activists, especially as supporters poured into the area throughout the weekend, culminating in the confrontations during the night.

But it was unclear whether the organizers could build on the momentum. Activists have a good record of pushing back against Beijing, including two years ago when student protesters defeated a plan to use a Beijing approved "patriotic curriculum" in schools. But they haven't succeeded on an issue as high-profile as this one. Just a few weeks ago, the pro-democracy movement had appeared to fizzle in the face of staunch opposition from Beijing, the city's government and from many local business people.

On Sunday, an effort by police to keep protesters away from government buildings appeared to backfire. As police converged on the scene and protesters spread out from its center, the conflict spread across three of Hong Kong's most important commercial neighborhoods.

When police started lobbing tear gas at the crowd, protesters dispersed but quickly regrouped and retook some ground. They ignored police signs telling them to leave and used metal barricades to prevent officers from moving them away.

At one point, a group of police cars was surrounded by a sea of protesters.

"Hong Kong police, you have been surrounded, please leave," protesters shouted over a sound system. Police showed red signs urging the activists to stop charging or force would be used.

After being sprayed with tear gas, 21-year-old Lee Wing, a media student at Hong Kong Shue Yan University, ran with other protesters to a park on the waterfront.

"We expected pepper spray at most," she said. "Our protective gear is for that."

A total of 26 people involved with the protests were sent to nearby hospitals for treatment Sunday, according to the government. Police said 78 people had been arrested in the protests.

Early Monday morning, thousands of protesters were still spread through downtown Hong Kong, and there appeared to be spontaneous gatherings also in the Causeway Bay shopping district and across Victoria Harbour in parts of Kowloon. Police fired rounds of tear gas into the late-night hours to try to contain the crowds.