U.N. Inaction on Somalia
All Actions of the UN Human Rights System Critical of Specific States, 2009 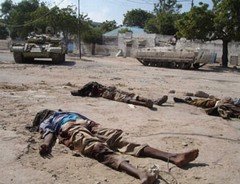 Ramadan fighting in Mogadishu is “worst in 20 years”


MOGADISHU, Sept 10 (Reuters) - Fighting in Mogadishu during the Muslim holy month of Ramadan has so far been some of the worst in 20 years, killing 32 civilians in four days this week, a human rights group in the Somali capital said on Thursday.

The Elman Peace and Human Rights Organisation said 18 women and seven children were among the dead, and that 82 civilians were wounded between Sept. 5-8 as Islamist insurgents battled the U.N.-backed government and African Union (AU) peacekeepers.

Western security agencies say the failed Horn of Africa state has become a safe haven for militant groups linked to al Qaeda who are plotting attacks across the region and beyond.

"The current human rights situation in Mogadishu is one of the worst in the last 20 years for the displacement, injuring and killing of civilians," the Elman group said in a report.

"From Sept. 5-8 ... the fighting in Mogadishu during the Ramadan fasting month is the worst (on record), according to the monitoring of Elman staff," it said.

The group said the behaviour of Islamist militants who launched attacks while civilians were breaking their fast with an evening meal, as well as firing mortar barrages from hiding places in residential neighbourhoods, was unacceptable.

It also accused government forces, backed by the AU peacekeepers from Uganda and Burundi, of indiscriminately retaliating by shelling civilian areas and business premises.

"Those behind the violations against civilians ... resulting in killing, injuring and destruction of public property must be held accountable," said Elman's vice-chairman Ali Shiekh Yassin.

President Sheikh Sharif Ahmed's government controls just parts of the coastal capital and central region. Most of the south is run by Islamist insurgents including the al Shabaab group, which Washington says is al Qaeda's proxy in Somalia.

On Wednesday, hardline al Shabaab fighters amputated the right hands of two teenage Mogadishu boys they said had been convicted of theft by a militant sharia court.

"We whipped another teenager for raping a lady. We also fined him $150 and expelled him from Mogadishu for a year," said Sheikh Abdul Basid Mohamed, an al Shabaab judge in the city.

The group has carried out executions, floggings and amputations before, mostly in the southern port of Kismayu. Movies and soccer games are banned in the rebels' territory, and men and women cannot travel together on public transport.

Al Shabaab's strict practices have shocked many Somalis, who are traditionally moderate Muslims, but some residents credit the insurgents with restoring order to regions they control.

Violence has killed more than 18,000 Somalis since the start of 2007 and driven another 1.5 million from their homes.

That has triggered one of the world's worst aid emergencies, with the number of people needing help leaping 17.5 percent in a year to 3.76 million or half the population.