U.N. Inaction on Pakistan
All Actions of the UN Human Rights System Critical of Specific States, 2006 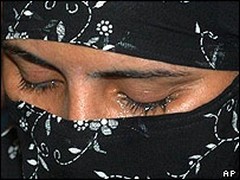 "Secular parties are furious after the draft law was amended to appease Pakistan's ultra-conservative Islamic parties... In Pakistan, rape is dealt with under Islamic laws known as the Hudood Ordinances. These criminalise all sex outside marriage. So, under Hudood, if a rape victim fails to present four male witnesses to the crime, she herself could face punishment. This has made it almost impossible to prosecute rape cases. According to the country's independent Human Rights Commission, a woman is raped every two hours and gang-raped every eight hours in Pakistan. These figures are probably an under-estimation as many rapes are not reported."