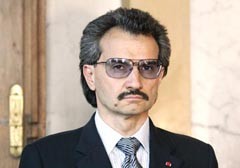 Owner of Arab satellite networks Prince Al-Waleed bin Talal has been threatened with death by Saudi Arabia's top judiciary official. All owners of satellite TV networks are fair game according to the Saudi Sheik.
Source: Forbes

He was answering listeners' questions during the daily radio programme Light in the Path, in which he and other clerics make rulings on what is permissible under Islamic law. One caller asked yesterday about Islam's view on satellite TV channels that broadcast "bad programmes" during Ramadan.

One of the most viewed Arab satellite networks is Rotana, which broadcasts films and music videos. It is owned by Prince Al-Waleed bin Talal, a billionaire businessman and member of the Saudi royal family whom Forbes ranks as the world's 13th richest person. Several other networks are owned by Saudi princes. Al-Lihedan did not specify particular channels in his judgment.

Fatwas are regularly issued on everyday issues, although they do not have the weight of law.

Al-Lihedan sparked controversy previously when he issued a religious decree permitting Saudis to join jihadists to fight US troops in Iraq."