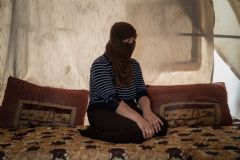 Sex Slaves for Sale: ISIS Use Facebook to Sell 1,800 Women for Brutal Rape

The Islamic State is using Facebook as a platform to sell women as sex slaves to fellow terrorists. The price tag on the women being traded over the social networking site is determined by the demand and supply.

The Facebook posts by the group showed that women were being sold for around US$8,000 (AU$11,500). The report by the Washington Post shed light on the lives of the hundreds of women who are held captive and traded by the Islamic State.

Abu Assad Almani, an Islamic State militant, posted images of a girl aged around 18 years on Facebook, the RT News reported. "To all the brothers thinking about buying a slave, this one is $8,000," Almani wrote. He reportedly posted another image featuring a face with teary eyes after a few hours and wrote, "Another sabiyah [slave], also about $8,000. Yes or no?"

The IS has a delineated set of rules which must be followed while dealing with their sex slaves. "The inevitable consequences of the Jihad establishment is that women and children of infidels will become captives of Muslims," the Mirror quoted a part of the IS Caliphate laws.

According to the Human Rights Watch, the terror group is holding captive a total of 1,800 women and girls. The IS claimed that the practice is in line with ancient Islamic traditions.

Some commentators doubted the price tag on the girl while some criticized Almani for posting pictures of women without a veil on social media. Some even mocked the girl's looks. "What makes her worth that price? Does she have an exceptional skill?" queried a correspondent in regard to the second photo.

"No," Almani replied. "Supply and demand makes her that price."

Within a few hours, Almani's profile was deleted, according to the Washington Post.

However, the posts presented an unsettling image of the growing slave trade by the Islamic State.