U.N. Inaction on Democratic Republic of the Congo
All Actions of the UN Human Rights System Critical of Specific States, 2010 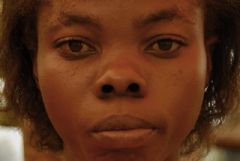 Lucienne (pictured) was enslaved for months by the FDLR [Democratic Liberation Forces of Rwanda], which includes former perpetrators of the Rwandan genocide. Members of the FDLR group were identified as responsible for mass rapes in the DRC committed in July/August 2010.

Some 200 women gang-raped near Congo UN base

JOHANNESBURG - Rwandan and Congolese rebels gang-raped nearly 200 women and some baby boys over four days within miles of a U.N. peacekeepers' base in an eastern Congo mining district, an American aid worker and a Congolese doctor said Monday.

Will F. Cragin of the International Medical Corps said aid and U.N. workers knew rebels had occupied Luvungi town and surrounding villages in eastern Congo the day after the attack began on July 30.

More than three weeks later, the U.N. peacekeeping mission in Congo has issued no statement about the atrocities and said Monday it still is investigating.

Cragin told The Associated Press by telephone that his organization was only able to get into the town, which he said is about 10 miles (16 kilometers) from a U.N. military camp, after rebels ended their brutal spree of raping and looting and withdrew of their own accord on Aug. 4.

At U.N. headquarters in New York, spokesman Martin Nesirky said Monday that a U.N. Joint Human Rights team verified allegations of the rape of at least 154 women by combatants from the Rwandan rebel FDLR group and Congolese Mai-Mai rebels in the village of Bunangiri. He said the victims are receiving medical and psycho-social care.

Nesirky said the U.N. peacekeeping mission has a military company operating base in Kibua, some 30 kilometers (about 19 miles) east of the village, but he said FDLR attackers blocked the road and prevented villagers from reaching the nearest communication point.

Civil society leader Charles Masudi Kisa said there were only about 25 peacekeepers and that they did what they could against some 200 to 400 rebels who occupied the town of about 2,200 people and five nearby villages.

"When the peacekeepers approached a village, the rebels would run into the forest, but then the Blue Helmets had to move on to another area, and the rebels would just return," Masudi said. There was no fighting and no deaths, Cragin said, just "lots of pillaging and the systematic raping of women."

International and local health workers have treated 179 women but the number raped could be much higher as terrified civilians still are hiding, he said.

"We keep going back and identifying more and more cases," he said. "Many of the women are returning from the forest naked, with no clothes."

He said that by the time they got help it was too late to administer medication against AIDS and contraception to all but three of the survivors.

Spokeswoman Stefania Trassari said her U.N. Organization for the Coordination of Humanitarian Aid was monitoring the situation but that access for humanitarian workers remains "very limited due to insecurity."

Luvungi is a farming center on the main road between Goma, the eastern provincial capital, and the major mining town of Walikale.

Kacha said on one day during the rebel occupation Indian peacekeepers had provided a military escort against the rebels to a large commercial truck traveling from Kemba to Luvungi, which is near a cassiterite mine and about 88 miles (140 kilometers) south of Goma.

U.N. mission spokesman Madnodje Mounoubai promised to get military comment on the assumption that the peacekeepers were protecting commercial goods but not civilians, which is their primary mandate.

Survivors said their attackers were from the FDLR that includes perpetrators of the Rwandan genocide who fled across the border to Congo in 1994 and have been terrorizing the population in eastern Congo ever since, according to Cragin. The Rwandans were accompanied by Mai-Mai rebels, he said, quoting survivors.

Masudi, the civil society leader, said the rebels arrived after Congolese army troops without explanation redeployed from Luvungi and its surroundings to Walikale. He said this happened after some soldiers deserted and joined rebels in the forest.

Rape as a weapon of war has become shockingly commonplace in eastern Congo, where at least 8,300 rapes were reported last year, according to the United Nations. It is believed that many more rapes go unreported.

Congo's army and U.N. peacekeepers have been unable to defeat the many rebel groups responsible for the long drawn-out conflict in eastern Congo, which is fueled by the area's massive mineral reserves. Gold, cassiterite and coltan are some of the minerals mined in the area near Luvungi, with soldiers and rebels competing for control of lucrative mines that give them little incentive to end the fighting.

"The minerals are our curse with the FDLR looting on one side and the soldiers looting on the other," said Masudi.

The Congolese government this year has demanded the withdrawal of the $1.35 billion-a-year U.N. mission, the largest peacekeeping force in the world with more than 20,000 soldiers, saying it has failed in its primary mandate to protect civilians.

Mission officials have said that the peacekeeping army is too small to police this sprawling nation the size of Western Europe, and that its peacekeepers are handicapped by rebels using civilians as shields and operating in rugged terrain where they are difficult to pursue.

The mission also has a difficult mandate of supporting the Congolese army, whose troops often also are accused of raping and pillaging.