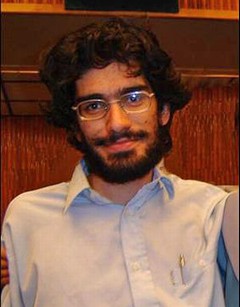 Undated photo said to be Mohsen Ruholamini, the son of a political adviser to a conservative politician, who reportedly died while in detention at Tehran's Evin prison
Source: LA Times

Mohsen Ruholamini, whose father was a senior advisor to conservative politician Mohsen Rezai, was reportedly arrested during a July 9 protest against President Mahmoud Ahmadinejad.

Reporting from Beirut, Lebanon - The son of a top aide to Mohsen Rezai, a prominent conservative politician, died while in Tehran's infamous Evin Prison after being swept up in the recent unrest, news websites reported today, in the latest sign of the extent the discord unleashed by the June 12 presidential election has shaken the country's establishment.

High-ranking clerics from both sides of Iran's political spectrum stepped up sharp warnings against each other's camps, while hard-liners continued to simmer over the appointment of a controversial aide to the inner circle of President Mahmoud Ahmadinejad.

But a majority of the Assembly of Experts, a powerful committee that oversees the office of Iran's supreme leader, Ayatollah Ali Khamenei, issued a statement today declaring support for him and Ahmadinejad's presidency, a blow for moderate cleric Ayatollah Ali Akbar Hashemi Rafsanjani, who is a supporter of the opposition camp and hoped to rally clerical support against hard-liners.

"Ignorant and biased individuals inside the country are fanning the flames of this fire ignited by foreign-based groups," he told worshipers. "These people try not to submit to the orders of the supreme leader and attribute him to a specific political faction. They are nothing in the face of a big population ready to sacrifice their lives for the supreme leader."

Meanwhile, reformist Ayatollah Asadollah Bayat Zanjani issued a statement warning of the Islamic Republic's collapse if it does not adhere to the will of the people, and condemned the use of force against ordinary people.

"Dominance and authority do not grant any legitimacy which depends on public confidence," he said in the statement. "When people recognize a government, it will become legitimate, otherwise, the government will automatically lose its legitimacy and it will collapse. . . . I warn the authorities to be afraid of divine vengeance and take lessons from the fate of the former Soviet Union."

Still, hard-liners and reformists appear to be united in their opposition to Ahmadinejad's appointment of Esfandiar Rahim Mashaei as his top vice president. Pro-government Basiji militiamen vowed to hold a march against the appointment, which Khamenei opposes, after the prayer.

"We have called on the president to reconsider his decision in his choice for first vice president," Khatami said. "I wish the supreme leader had not intervened. But now that he has jumped into this fray, the president should not hesitate any longer."

The Assembly of Experts statement, broadcast over state radio, also criticized Ahmadinejad for failing to adhere to Khamenei's order to dump Mashaei. But it also urged the chamber's leader, Rafsanjani, "to disappoint the enemies of Islam and the system . . . with his firm and more transparent support for the leader," a blow to the opposition.

Iran continues to reel from the aftermath of the election, which was marred by opposition allegations of heavy vote fraud and led to a subsequent crackdown in which dozens were killed and hundreds arrested.

Zanjani condemned the use of torture to extract videotaped confessions from detainees, warning the state broadcaster that airing such statements, as demanded by pro-Ahmadinejad politicians, would be tantamount to a "mortal sin."

Treatment of protesters detained or hurt during the unrest continues to energize protesters and supporters of reformist leader Mir-Hossein Mousavi, who ran and lost against Ahmadinejad. Mohsen Ruholamini, a computer science engineer in his 20s, was reportedly arrested during a July 9 protest against Ahmadinejad that also marked the anniversary of a student uprising. His family was informed Tuesday night by telephone that he had died.

His father, Abdul-Hossein Ruholamini, was a senior advisor to Rezai, a former Revolutionary Guard commander who ran as a conservative in the election.

On Tuesday, Mousavi's family confirmed the detention of his brother-in-law, 62-year-old physicist Shahpour Kazemi, who was taken into custody a month ago. "I have consoled my old parents during this time and I have held back from stirring tensions over this issue," Mousavi's wife, Zahra Rahnavard, told the semiofficial Iranian Labor News Agency on Thursday. "I can't tolerate the immoral wave of trumped-up accusations against my brother."

On Thursday, police arrested the father of Massoud Hashemzadeh, a 27-year-old musician killed in the unrest, after his family insisted on placing mourning banners outside their home. The mother of another young man killed in the unrest, Sohrab Aarabi, addressed the Tehran City Council this week in a dramatic speech that was videotaped and posted to the Internet.

"I could barely eat," Parvin Fahimi told council members in a teary presentation about her monthlong quest for her missing son. "I still can't eat. My throat clenches up, and I've only sustained myself with liquids these recent times. "Why did they kill my child?" she demanded. "On whose orders? I want to ask the City Council, what did Sohrab want . . . other than freedom of expression?"