U.N. Inaction on Venezuela
All Actions of the UN Human Rights System Critical of Specific States, 2018 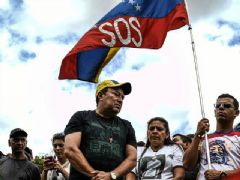 Study: Over 100 Killed, Thousands Hungry, Brutalized in Venezuela in 2017

The human rights crisis in Venezuela has further deteriorated as socialist dictator NicolÃ¡s Maduro seeks to destroy all opposition and turn the country into a one-party state.

A new report from the Interamerican Commission on Human Rights (ICHR) on Venezuela details the breakdown of four major rights, which include the country's democratic processes, freedom of expression and right to protest, violence and citizen security, and citizen's economic, social, cultural, and environmental rights.

The commission notes that, over the past few years, the Maduro regime has progressively weakened the power of democratic institutions, which came to a head last year through the creation of a fraudulent lawmaking body known as the "national constituents assembly," which effectively rendered the country a dictatorship.

It also comments on the increased levels of repression against political dissidents, many of whom have been imprisoned, tortured, or even killed. The human rights organization Foro Penal counts a total of 237 political prisoners across Venezuela, including opposition leader Leopoldo LÃ³pez. Police have locked up others for representing a political threat, or individuals from groups they feel it necessary to intimidate, such as students, doctors, and members of the military.

Relentless attacks on the media also quash freedom of expression through censorship, the intimidation of journalists, and the criminalization of information seen as contrary to the government.

Excessive force and violence against protesters and political agitators by security forces have also become commonplace. Over the course of 2017, 125 people alone were killed during demonstrations against the government. Most recently, the private militia leader Ãscar PÃ©rez was executed after being surrounded by the military in a shootout.

The staggering increase in levels of crime, violence, and insecurity is another infraction upon people's human rights. Many are unable to walk the streets or travel to certain areas for fear of being attacked or kidnapped.

An unprecedented economic humanitarian crisis is also a compounding factor of the crisis, with millions of Venezuelans lacking basic living resources including food, medicine, and electricity, as well as living essentials such as toilet paper, toothpaste, and shampoo.

This crisis has also had a major impact on education and housing, with many children failing to receive a basic education while millions of people also go without adequate housing or shelter.

As a result, thousands of people are now leaving the country every day, mainly to neighboring countries such as Colombia and Brazil, which is beginning to create tension between local communities, migrants, and the respective governments.

The last major report into Venezuela by the United Nations had similar findings, arguing that the regime had carried out "extensive" abuses which include "mounting levels of repression of political dissent by national security forces, and increasing stigmatization and persecution of people perceived as opposing the Government of President Maduro."