U.N. Inaction on Democratic Republic of the Congo
All Actions of the UN Human Rights System Critical of Specific States, 2018 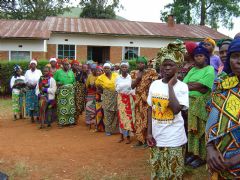 Democratic Republic of the Congo, November 2, 2018

‘They killed my children and raped me’: sexual violence remains rife in Congo

Continuing violence in southern areas of the Democratic Republic of the Congo has led to thousands of violent sexual assaults, accompanied by widespread killing and torture, aid agencies have said.

International attention has focused on the east of the sprawling central African country in recent months, where there is an ongoing insurgency and a lethal outbreak of Ebola.

But a conflict in Kasai Central province that was thought to have subsided after a peak of violence more than a year ago continues to cause massive suffering, reports suggest.

MÃ©decins Sans FrontiÃ¨res say that, between May 2017 and September 2018, they treated 2,600 victims of sexual violence in the town of Kananga in Kasai Central province, 80% of whom reported having been raped by armed men.

Victims also told MSF about decapitations, children hacked to death in front of their parents, multiple rapes of teenagers, and systematic theft and beatings.

"I was raped in my home, next to my husband's body, in the presence of my children. It was last year, during the violence. I had five children. They killed three of them, leaving me with just two. They raped my three oldest girls before killing them," said Mamie, in testimony recorded by aid workers in Kananga in September.

Of the 2,600 people treated by MSF since May 2017, 32 were men, some of whom reported having been forced under armed threat to rape members of their own community. Another 162 were children under the age of 15, including 22 below the age of five.

"These figures are an indication of the high level of violence that has persisted throughout the past year," said Karel Janssens, MSF head of mission in DRC. "The shocking testimonies from survivors that we have heard on a daily basis describe how people's lives and communities have been torn apart, making it very difficult for them to rebuild and move forward."

Last month, the Nobel prize was awarded to Denis Mukwege, a gynaecologist who founded and maintains the Panzi hospital in Bukavu, eastern DRC. He has cared for tens of thousands of women who suffered sexual assault in the country's recurrent civil conflict.

MSF teams in Kasai Central provide psychological care for the most traumatised patients. Half report that at least one member of their family has been killed, or say their homes and belongings have been pillaged or destroyed. Many suffer both physical violence and theft. One in 10 spoke of having directly witnessed a murder or similar act.

The violence in Kasai surged in 2016, when local communities formed a militia in support of a local leader who opposed the government and was killed by the police.

The authorities launched an extensive campaign against insurgents, and there have been repeated reports of massacres, ambushes and attacks on villagers. Dozens of mass graves have been found.

Congo's Catholic church said in a report last year that more than 3,300 people had been killed in Kasai in just a few months. The church blamed government forces, their proxies and the insurgents.

The latest statistics on sexual assaults are likely to reveal only a fraction of the problem in Kasai Central, MSF said. The organisation now provides care to more than 200 patients each month on average.

Much of the instability across the country has been caused by competition between political actors in the run-up to elections in December.

President Joseph Kabila, who has been in power since 2001, is barred from seeking a third mandate.

In April, the government boycotted a key donor conference in Geneva, accusing aid agencies of exaggerating the extent of the country's crisis. Officials in DRC claim only 230,000 people have been displaced, a fraction of the UN estimate of 4.5 million.