U.N. Inaction on France
All Actions of the UN Human Rights System Critical of Specific States, 2021 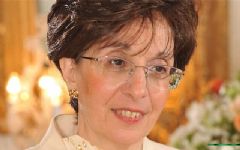 Sarah Halimi, who was murdered by Kobili Traore

France's highest court on Wednesday found that the killer of a Jewish woman was not criminally responsible and could not go on trial, provoking anger from anti-racism groups who say the verdict puts Jews at risk.

Sarah Halimi, an Orthodox Jewish woman in her sixties, died in 2017 after being pushed out of the window of her Paris flat by neighbor Kobili Traore, who shouted "Allahu Akbar" ("God is great" in Arabic).

The verdict by the court means Traore will not face any trial.

In its decision Wednesday, the Court of Cassation's Supreme Court of Appeals upheld rulings by lower tribunals that Traore cannot stand trial because he was too high on marijuana to be criminally responsible for his actions.

Traore, a heavy pot smoker, has been in psychiatric care since Halimi's death. The court said he committed the killing after succumbing to a "delirious fit" and was thus not responsible for his actions.

Her killing stoked debate over a new strain of anti-Semitism among radicalized Muslim youths in predominantly immigrant neighborhoods.

Macron said there was "a need for a trial" even if the judge decided there was no criminal responsibility.

The handling of Halimi's slaying has been a watershed event for many French Jews, who say it underlines the French state's failures in dealing with anti-Semitism.

"This is an additional drama that adds to this tragedy," said the International League against Racism and Anti-Semitism (LICRA) after the ruling.

"From now on in our country, we can torture and kill Jews with complete impunity," added the president of the Representative Council of Jewish Institutions in France (CRIF), Francis Kalifat.

The Simon Wiesenthal Centre's director for international relations, Shimon Samuels, called the decision a "devastating blow," which, he said, "potentially creates a precedent for all hate criminals to simply claim insanity or decide to smoke, snort or inject drugs or even get drunk before committing their crimes"

But Traore's lawyer Patrice Spinosi said that while he could "obviously understand the victims' frustration that there will not be a trial," the law "in its current state" does not allow perpetrators to be tried in such circumstances.

An appeals court said Traore, now in his early 30s, had anti-Semitic bias and that the killing was partly connected to it. But it also accepted the defense claims that Traore was too high to be tried for his actions and he was placed at a psychiatric facility.

French Jews have been repeatedly targeted by jihadists in recent years, most notably in 2012, when an Islamist gunman shot dead three children and a teacher at a Jewish school in the southern city of Toulouse and in 2015 when a pro-Islamic State radical gunned down four people at a Jewish supermarket in Paris.