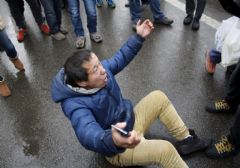 A supporter of China's rights lawyer Pu Zhiqiang reacts after he was pushed to the ground by Chinese policemen near a court where Pu's trial is being held, in Beijing, China

The trial of one of China's most high profile human rights lawyers, on charges of inciting ethnic hatred and provoking trouble, lasted just three hours on Monday, with police blocking diplomats, foreign reporters and protesters from the Beijing court.

Pu Zhiqiang, who has spent nearly 19 months in detention, faces up to eight years in prison if convicted, according to one of his lawyers, Shang Baojun.

As many as 11 diplomats from countries including the United States, Germany and France congregated near the courthouse seeking to observe the trial. They were refused admittance by the police.

Dan Biers, deputy political counselor of the U.S. embassy in Beijing, called for Pu's release and criticized the "vague charges" that have been handed down against Pu.

Police tried to prevent Biers from reading out a statement near the courthouse, pushing him and foreign reporters out of the way. Dozens of police and plain clothes security surrounded the Beijing No. 2 Intermediate People's Court, where they blocked foreign journalists attempting to report on the trial.

Neither the court nor public security authorities could immediately be reached for comment. China's Foreign Ministry spokesman Hong Lei said "law enforcement authorities carried out order management at the scene in accordance with the law".

China has charged many rights activists with "picking quarrels and provoking trouble", saying it is a country with rule of law and dismissing any international criticism on its rights record.

The main accusations against Pu revolve around seven microblog posts on his online accounts, his lawyers say. The posts had criticized China's ethnic policy in the troubled western region of Xinjiang and denounced several officials.

Pu's trial lasted a little over three hours, Mo Shaoping, another one of his lawyers, told Reuters.

"He admitted the seven microblogs were written by him, there was no issue with it, this is a fact," Mo said, recounting what Pu said in court. "Secondly, he said that if these microblog posts had caused injury to other people, he apologizes for it. Thirdly, he had no intention to incite ethnic hatred or pick quarrels and provoke trouble."

Mo said the court did not ask Pu specifically whether he was pleading guilty.

Pu's case will be seen by rights groups and the West as a measure of what they say is the most severe clampdown on human rights in two decades in China.

"Pu's trial is extremely important - he's the ultimate canary in the coalmine," said Maya Wang, a China researcher for Human Rights Watch. "If they decide to be harsh against him, I'd say it'll signify a further escalation of hostility towards human rights activism."

Pu has represented many well-known dissidents, including artist Ai Weiwei and activists of the "New Citizens' Movement", a group that has called on Chinese leaders to make their wealth public.

Despite being pushed back by the police, about 40 supporters gathered outside the courthouse and chanted slogans to show their solidarity with Pu.

"Pu Zhiqiang is not a criminal. He will be judged by history," said Qu Biao, 53, a teacher from northern Shaanxi province who had traveled to Beijing to show his support for Pu.

"The Chinese constitution protects freedom of speech, so putting him on trial is unjust and shameless. If Pu Zhiqiang is guilty, then we are all guilty."

Pu, 50, was detained in May 2014 after he attended a meeting in a private home to commemorate the suppression of pro-democracy protests in and around Tiananmen Square in 1989. Pu, who had participated in the protests, had vowed to commemorate the anniversary every year.

Authorities had rejected his lawyers' request for medical parole earlier in September, his lawyer, Shang, said.

In the past two years, the government has launched a crackdown on online rumors, detained hundreds of human rights lawyers in a nationwide sweep, and jailed a journalist on a charge of leaking state secrets.