U.N. Inaction on Turkey
All Actions of the UN Human Rights System Critical of Specific States, 2017 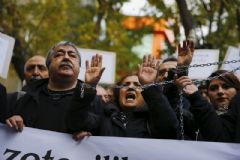 Turkey has dismissed more than 4,400 civil servants including teachers, police officers and academics over their suspected links with terrorist organizations, a decree showed late on Tuesday, in the latest purge since a failed coup last July.

Ibrahim Kaboglu, a prominent constitution professor who has expressed opposition to planned constitutional changes giving President Tayyip Erdogan greater executive powers, was among those ousted under the decree published in the Official Gazette.

Court clerks, computer experts and librarians were also among 4,464 sacked, part of a crackdown since the July coup bid which Turkey says was carried out by U.S.-based Islamic cleric Fethullah Gulen. Gulen denies the allegation.

Turkey has already removed or suspended more than 125,000 people and formally arrested 40,000 since the attempted coup during which rogue soldiers tried to overthrow the government and Erdogan, killing more than 240 people, most of them civilians.

The government says the action is justified by the nature of the threat to the state.

The crackdown has covered a wide range of professions from civil servants and soldiers to medics. Dismissals are announced in the Official Gazette with no reasons given beyond "membership of, or links to, terrorist organizations or groups deemed to be acting against national security interests".

Rights groups and some European countries have said Erdogan is using the current state of emergency to quash dissent. Ankara says the measures are necessary to root out supporters of the putsch and other terrorists.

Among the 330 academics dismissed were those who signed a petition last year criticizing military action in the restive southeast against Kurdish militants.

Erdogan had said the academics would pay a price for their "treachery".

Hundreds of civilians, members of the security forces and militants have been killed since the conflict with the Kurdistan Workers Party (PKK) reignited in July 2015 in the worst violence Turkey has seen for 20 years. The PKK is designated a terrorist group by Turkey, the United States and the European Union.