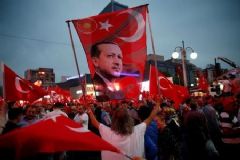 Turkey on Wednesday deepened a crackdown on suspected followers of a U.S.-based cleric it blames for a failed coup, dismissing nearly 1,700 military personnel and shutting 131 media outlets, moves that may spark more concern among its Western allies.

So far, tens of thousands of people - including police, judges and teachers - have been suspended or placed under investigation since the July 15-16 coup, which Turkey says was staged by a faction within the military loyal to the Muslim cleric Fethullah Gulen.

Gulen, who lives in self-imposed exile in Pennsylvania but whose movement has a wide following in Turkey where it runs a large network of schools, has denied any involvement in the failed putsch.

Western governments and human rights groups, while condemning the abortive coup in which at least 246 people were killed and more than 2,000 injured, have expressed concern over the extent of the crackdown, suggesting President Tayyip Erdogan may be using it to stifle dissent and tighten his grip on power.

Erdogan, who narrowly escaped capture and possibly death on the night of the coup, denies the crackdown has wider aims and says the Gulen movement threatened democracy by attempting to build a "parallel state" within the military, media and civil service.

On Wednesday, the military dishonorably discharged 1,684 of its personnel, a Turkish government official said, citing their role in the failed coup. Of those, 149 were generals and admirals, said the official, who requested anonymity. Data show that would represent roughly 40 percent of all generals and admirals in Turkey's military.

Broadcaster CNN Turk has reported that more than 15,000 people, including around 10,000 soldiers had been detained so far over the coup, citing the interior minister. Of those, more than 8,000 were formally arrested pending trial, it said.

In addition, the government said in its official gazette that three news agencies, 16 television channels, 45 newspapers, 15 magazines and 29 publishers have been ordered shut down.

These moves, which follow the closure of other media outlets with suspected Gulenist ties as well as the detention of journalists will further stoke concerns among rights groups and Western governments about the scale of Erdogan's post-coup purges.

The United States said on Wednesday it understood Turkey's need to hold perpetrators of the attempted coup to account, but said the detention of more journalists was part of a "troubling trend".

Turkey ordered another 47 journalists detained on Wednesday, singling out columnists and other staff of the now defunct Zaman newspaper, the government official said. Authorities in March shut down Zaman, widely seen as the Gulen movement's flagship media organization.

"The prosecutors aren't interested in what individual columnists wrote or said," said the official, who requested anonymity. "At this point, the reasoning is that prominent employees of Zaman are likely to have intimate knowledge of the Gulen network and as such could benefit the investigation."

However, the list includes journalists, such as Sahin Alpay, known for their leftist activism who do not share the religious worldview of the Gulenist movement. This has fueled the concerns that the investigation may be turning into a witch-hunt of the president's political opponents.

The media reported on Monday that arrest warrants had been issued for 42 other journalists, 16 of whom have so far been taken into custody.

Alpay is a former official of Turkey's left-leaning, secularist main opposition CHP party. The Dogan news agency said police raided his home in Istanbul early on Wednesday and detained him after a 2-1/2-hour search of the property.

Separately, Turkey's capital markets board said it had revoked the license of the head of research at brokerage AK Investment and called for him to face charges over a report he wrote to investors analyzing the coup.

Erdogan's ruling Islamist-rooted AK Party and opposition parties, usually bitterly divided, have demonstrated a rare spirit of unity since the abortive coup and are seeking consensus on constitutional amendments partly aimed at "cleansing" the state apparatus of Gulenist supporters.

A senior AK Party official said on Wednesday the parties were discussing plans to increase parliamentary control of a key state body that appoints judges and prosecutors.

Also on Wednesday a government official said Turkish special forces were still hunting in the hills around the Mediterranean resort of Marmaris for a group of 11 commandos who are believed to have tried to capture or kill Erdogan on the night of the coup, when he was on holiday in the area.

In testimony provided following his detention, Major General Mehmet Disli, the brother of a prominent ruling party lawmaker, strongly denied allegations that he was involved in the coup, saying he had been forced by the plotters to mediate with the chief of the military's General Staff on July 15.

General Staff head Hulusi Akar was held hostage for hours by the plotters, but refused to join their coup.

Erdogan, a popular but polarizing figure who has dominated Turkish politics for more than a decade, will chair an annual meeting of the Supreme Military Council (YAS) on Thursday after vowing to restructure the armed forces following the coup.

The General Staff said 35 planes, including 24 fighter jets, 37 helicopters, 74 tanks and three ships had been used by the coup plotters, NTV reported. It put the number of soldiers from the Gulenist network involved in the attempted putsch at 8,651, or about 1.5 percent of the armed forces.

In Greece, authorities on Wednesday postponed hearings for eight Turkish soldiers who sought asylum there after fleeing Turkey. The men - three majors, three captains and two sergeant majors - deny being involved in the coup, but Ankara has branded them "traitors" and is demanding their extradition.

Erdogan has also signaled the country might restore the death penalty in the wake of the failed coup, citing strong public support for such a move, though the European Union has made clear this would scupper Turkey's decades-old bid to join the bloc.

Turkish officials have complained of what they perceive as a lack of support from the EU over the coup, while European leaders have urged Ankara to show restraint and a sense of proportion in bringing those responsible to justice.

The attempted coup has also tested Turkey's ties with its NATO ally the United States, where Gulen has lived in self-imposed exile since 1999. Responding to Turkey's request for Gulen's swift extradition, Washington has said Ankara must first provide clear evidence of his involvement in the coup.

Gulen lives in a secluded compound in Pennsylvania's Pocono Mountains, but Erdogan has reason to worry about the reclusive cleric's reach inside Turkey. In 2013, his followers in the police and judiciary opened a corruption probe into business associates of Erdogan, then prime minister, who denounced the investigation as a foreign plot.

The strains with the EU and the United States have coincided with Turkey's renewed push to repair ties with Russia, badly hurt last November by the Turkish downing of a Russian jet involved in military operations in Syria, and Moscow's subsequent imposition of trade sanctions.

Simsek, respected by Western investors as a safe pair of hands in guiding the Turkish economy, also said he saw no reason to downgrade Turkey's credit rating following the coup.

Standard & Poor's recently revised the country's sovereign debt outlook to negative from stable and Moody's has said it will review the rating for a possible downgrade.