U.N. Inaction on Turkey
All Actions of the UN Human Rights System Critical of Specific States, 2018 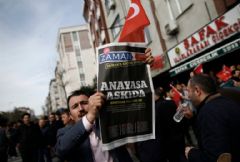 A rally in support of the Turkish newspaper Zaman in Istanbul in 2016. Turkey has more journalists in prisons than any other country.

LONDON - A Turkish court sentenced 24 journalists to prison on Friday for alleged links to a religious sect that the government calls a terrorist group and that s been blamed for a failed coup attempt in 2016.

Most of the journalists worked for news organizations that are considered friendly to Fetullah Gulen, a cleric living in seclusion in a small town in Pennsylvania. T he Turkish government claims that he heads a shadowy, violent movement aiming to overthrow President Recep Tayyip Erdogan.

Mr. Erdogan has become increasingly authoritarian since the coup attempt. He has steadily tightened his control over the government, the military, the media, courts, schools and even the internet, fraying relations with Turkey's Western allies. He has purged tens of thousands of people suspected of disloyalty from the government and military, and thousands more have been arrested and charged with supporting terrorism.

In the July 2016, elements of the military appeared to seize power, and aircraft bombed the Parliament building and presidential palace in Ankara. Hundreds of people were killed and thousands were injured before Mr. Erdogan reasserted control.

His government contends that the Gulen movement, also known as Hizmet, tried to overthrow the government after infiltrating public and private institutions, in effect creating its own parallel system. Turkey has demanded Mr. Gulen's extradition, but the United States has refused.

Twenty-two of the journalists sentenced on Friday were convicted of being members of an armed terrorist group - Mr. Gulen's organization - and sentenced to 6Â¼ to 7Â½ years in prison. Several of them had worked for Zaman, a major newspaper that was one of several news organizations the government shut down in 2016, and had gone on to other outlets.

Two others were convicted on a lesser charge of helping a terrorist group, but were freed based on time they have already served. One of them, Atilla Tas, is a well-known pop singer and columnist who was sentenced to more than three years. Mr. Tas is famed for his satirical wit on Twitter, which he has used to criticize and poke fun at the government.

"To those friends who are curious, the judicial process is not over," he wrote on Twitter on Thursday. "Eventually I will be acquitted from this case, I believe. You believe in me, too. I did nothing but criticize."

In December, Turkey held 73 journalists in prison, more than any other country, according to the Committee to Protect Journalists.

Since then, it has sentenced two journalists, three other media company employees, and a political commentator to life in prison, after the government charged that they had helped start the coup with subliminal messages on a broadcast. And 17 journalists and executives of the last prominent newspaper that is independent of the government are on trial.