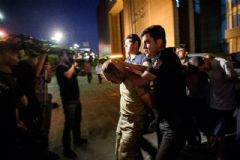 Turkish authorities have expanded a crackdown on military officials to include police, judges, governors and millions of civil servants in a massive purge of opponents following a failed coup attempt.

President Recep Tayyip Erdogan and his supporters now say that they face an unprecedented threat and that the campaign to root out traitors is necessary to restore the rule of law. But the sheer scale of the purge in the days since the thwarted coup has alarmed Turkey's allies in the West and raised fears that the NATO member is on a slide toward ever more authoritarian rule.

"We are seeing a movement towards more authoritarianism" in the wake of the coup, said Marc Pierini, a Turkey expert at the Brussels-based think tank Carnegie Europe.

Erdogan - who has ruled Turkey for 13 years, first as prime minister and now as president - had already grown increasingly authoritarian in what critics say is a quest to consolidate power. He has jailed journalists and opponents, and even sidelined rivals within his own party.

His latest push was for Turkey to transform from a parliamentary to a presidential system, a move that would place even more power in the chief executive's hands. This, in particular, "is a dangerous moment for Turkey," Pierini said of the attempted coup's aftermath. "There are quite a few disturbing things happening."

Rights advocates warned on Monday that the swift roundup of so many bureaucrats indicated that the arrests were based on little to no evidence. Such a vast detention or expulsion of employees at key state institutions may encourage rather than prevent more instability, critics said.

Some law enforcement officers working at police stations in the capital, Ankara, spoke of the inhumane treatment of detainees in their custody. Many of those held were not documented nor were their identifies verified, the police officers said.

They spoke on the condition of anonymity for fear of reprisal from superiors.

Amnesty International urged the Turkish government to respect human rights, amid reports "that detainees in Ankara and Istanbul have been subjected to a series of abuses," the rights group said.

"A backslide on human rights is the last thing Turkey needs," John Dalhuisen, Amnesty International's director for Europe and Central Asia, said in a statement. New York-based Human Rights Watch said the government "has the complete right to hold to account those involved in the coup."

But "the speed and scale of the arrests, including of top judges, suggests a purge rather than a process based on evidence," Hugh Williamson, the group's Europe and Central Asia director, said in a statement.

Indeed, Turkish authorities have yet to make public evidence linking the thousands of people detained directly to the coup. The government has accused supporters of Erdogan's archÂ¬rival, Muslim preacher Fethullah Gulen, of orchestrating and carrying out the attempted coup. Gulen lives in self-imposed exile in the United States, but Erdogan loyalists have long accused Gulen's followers of infiltrating state institutions.

In an interview with CNN, Erdogan said he was with his family in the coastal resort of Marmaris when the fast-moving events began on Friday. Two of his bodyguards were killed in an operation against him, he said, adding that "if I had stayed 10 or 15 additional minutes there, I would have been killed or I would have been taken."

Erodgan and Yildirim, the prime minister, both called on the United States to extradite Gulen to Turkey. But in frank statements to the news media, U.S. Secretary of State John F. Kerry said explicitly that the United States wants evidence, not allegations, of the involvement of Gulen before authorities approve an extradition.

Turkey's government has not completed a formal request to extradite the reclusive cleric.

Still, a senior Turkish official, speaking on the condition of anonymity, said that there had been "an ongoing inquiry into the Gulen movement's penetration of law enforcement, the judiciary and the military."

Known members of the movement within the military "had been under investigation for some time," the official said. "There was a list of people who were suspected of conspiring to stage a coup."

Such comments have alarmed European leaders who have attempted to forge better relations with Turkey in the past year, as both sides deal with a mammoth refugee crisis stemming from Syria and Iraq.

"It looks at least as if something has been prepared" before ordering the arrest of so many public officials, said Johannes Hahn, the European Union commissioner responsible for handling Turkey's membership bid. "The lists are available," Hahn said, according to the Reuters news agency. "Which indicates it was prepared and to be used at a certain stage."

Also speaking in Brussels, where the E.U. and NATO are based, Kerry said that the Western military alliance would scrutinize Turkey in the coming days to ensure that it adheres to the bloc's criteria for democracy and the rule of law.

The international community, including NATO Secretary General Jens Stoltenberg, has made clear that it stands behind Turkey's elected government.

But "the fact that an attempted coup has taken place has profoundly shaken the confidence of many in Turkey," said Bulent Aliriza, director of the Turkey Project at the Center for Strategic and International Studies.

The U.S. ambassador to Turkey, John Bass, said in a statement on Monday that speculation by some public figures that the United States in some way supported the coup was "categorically untrue."

"Such speculation is harmful to the decades-long friendship between two great nations," Bass said. "We have been clear that the United States would be willing to provide assistance to Turkish authorities conducting their investigation into the coup attempt."