U.N. Inaction on Turkey
All Actions of the UN Human Rights System Critical of Specific States, 2014 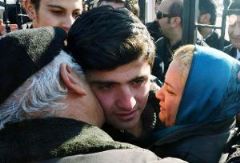 Turkish police have arrested a 16-year-old high school student in the city of Konya on charges of insulting President Tayyip Erdogan, local media reported on Thursday.

The teenager's lawyers have appealed against the prosecution, which came after he read out a statement during a ceremony to commemorate the killing of a Turkish soldier by Islamists in the 1920s.

In a video broadcast by Dogan News Agency, the teenager was shown defending secularism and the principles of Mustafa Kemal Ataturk, the founder of the modern Turkish republic.

He criticised the ruling AK Party government and Mr Erdogan personally over corruption allegations, as a crowd surrounding him chanted "everywhere is bribery, everywhere is corruption".

Mr Erdogan portrayed a high-reaching corruption scandal that was initiated a year ago as a coup attempt orchestrated by his former ally, the US-based cleric Fethullah Gulen, to undermine his rule.

The scandal posed one of the biggest challenges to his 11-year-rule, leading three members of his cabinet to quit and drawing international criticism for his response, tightening Internet controls and reassigning police, judges and prosecutors.

The teenager, who is being held in detention, has pleaded not guilty, Dogan News Agency said.

Atilla Kart, of the main opposition party CHP, said on Twitter that "an environment of fear, oppression and threat" was being created by the presidency.

Turkey's penal code forbids insulting the president. Ahmet Davutoglu, the prime minister, was critical of the teenager and said everyone should respect the post of the presidency.