U.N. Inaction on Belgium
All Actions of the UN Human Rights System Critical of Specific States, 2016 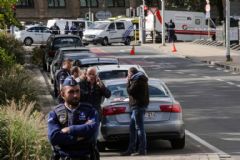 Police officers at the site of the stabbing

"We are considering this as a terrorist attack now, yes," Mr. Van Der Sypt said. Since the March terror attacks that killed 32 people, Belgian authorities have broken up several terror cells that officials said were plotting further attacks.

There have also been several knife attacks, some of which officials have said were terror related and others they have attributed to mentally unstable individuals.

In August, Belgian authorities opened a terrorism probe after a machete attack on two police officers in the city of Charleroi. That assailant, a 33-year-old Algerian man who had been living in Belgium illegally, was killed by police.

Wednesday's knife attack occurred in the Schaerbeek district of Brussels, in the north-central section of the Belgian capital.

Mr. Van Der Sypt wouldn't elaborate on why officials were considering Wednesday's attack as an act of terror. He wouldn't comment on whether the 43-year-old man had any ties to extremist groups.

The suspect was overpowered by another police patrol shortly after the attack. Officers shot him in the leg to subdue him. While apprehending the suspect, a third officer was slightly injured.

The suspect was taken to a hospital, where he was being treated Wednesday. Neither officer nor the suspect incurred life-threatening injuries, Mr. Van Der Sypt said. The suspect remains in the hospital and it is not clear when he will appear before a judge specializing in terrorism, officials said.

Belgian federal prosecutors later said that they conducted a search in the Brussels district of Schaerbeek at a house where the suspect was living. No weapons or explosives were found. They gave no further information.

Belgian officials confirmed the suspect was a former soldier, discharged from the Belgian army in 2009.

Officials said Belgian police are investigating whether the man had any contacts with suspected terrorists or foreign fighters in Syria.