U.N. Inaction on Venezuela
All Actions of the UN Human Rights System Critical of Specific States, 2014 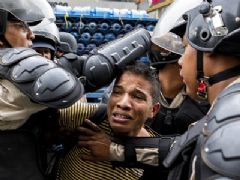 One of the arrested demonstrators

Later in the day, a National Policeman was shot in the head and killed while two others officers were injured by gunfire in an affluent district of the capital where security forces clashed with young protesters in the streets. President NicolÃ¡s Maduro said an investigation was underway but quickly blamed the incident on snipers working for his political foes.

"Enough with the murders by these right-wing groups who are bent on chaos and death. This is the result of a permanent conspiracy against our country," Mr. Maduro said during a televised address, promising to find those responsible.

The tent raids were aimed at stamping out the last vestiges of a three-month-old protest movement that has resulted in at least 42 deaths and shaken the populist government that has ruled Venezuela for 15 years.

Interior Minister Miguel Rodriguez Torres told reporters 243 demonstrators were taken into custody in an operation that began before dawn Thursday. The camps, he said, were sheltering "the most violent groups that would commit terrorist acts."

Troops were shown dismantling the makeshift camps on state television, flipping over tents and dragging away mattresses the students had been using.

Mr. Rodriguez Torres, speaking from the largest camp, set up in eastern Caracas in front of United Nations offices, said investigators had discovered drugs and weapons, including tear gas and Molotov cocktails.

The raids and arrests spurred more protests later in the day.

"The students aren't going to be scared off the streets," said Fernando Rodriguez, a 27-year-old university student who, with friends, blocked a road with debris. "I'm set in going to the streets, block a road and fight in that way."

Since the protests erupted in early February, officials have accused participants of being violent mercenaries out to topple the state with U.S. assistance. The government hasn't offered evidence of its claims, and the U.S. had denied involvement in the unrest.

In Washington, the Senate Foreign Relations Committee held a hearing on a bill that would impose sanctions, including a visa ban and asset freeze, against Venezuelan officials accused of human-rights abuses.

Sen. Robert Menedez (D., N.J.), committee chairman and a co-sponsor of the bill, said the abuses in Venezuela have been "far worse than I anticipated" during the running battles between demonstrators and security forces. "We should be perfectly clear that the primary responsibility for the excessive, unjustified use of force rests with the Maduro administration," he said.

Sen. Marco Rubio (R., Fla.), another sponsor, said the U.S. should "sanction human-rights violators who, by the way, happen to be people who travel to the U.S. with impunity, buy properties in the U.S. [and] laugh at us along the way."

But Roberta S. Jacobson, the State Department's top diplomat on Latin America, recommended that talks between some Venezuelan opposition leaders and the government be given time. "The process is important because it is the first time they have had such a process," Ms. Jacobson said, adding sanctions could do more harm than good by fueling the Venezuelan government's anti-U.S. rhetoric.

The protests began Feb. 4 in the western state of Tachira and spread nationwide, driven by Venezuelans angry over high crime, a crumbling economy and corruption they assert is rampant in Mr. Maduro's year-old government.

The government has responded forcefully, with National Guard troops and armed civilian gangs supportive of the state battling with students. More than 2,500 protesters have been arrested, including Leopoldo Lopez, a former opposition presidential candidate.

The protests have split the opposition, analysts say, because some who oppose Mr. Maduro believe that the violence in the streets has hurt their cause.

But the government's actions in the protests, coupled with the general state of disarray in Venezuela, has also hurt Mr. Maduro. In April, his approval rating fell to 37%, down 10 points from February, according to the most recent poll by the Datanalisis polling company in Caracas.