U.N. Inaction on Austria
All Actions of the UN Human Rights System Critical of Specific States, 2018 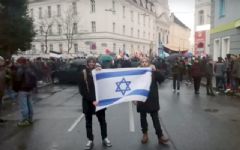 Jewish students holding the Israeli flag at the rally

The Vienna police are pursuing criminal charges against three pro-Israel activists for waving an Israeli flag in protest of antisemitic slogans at a demonstration against Jerusalem having been recognized by the US as the capital of the Jewish state.

The police are seeking a â¬100 fine or two days in jail for the display of Israel-support at the December 8 anti-Israel rally near the US Embassy in Austria's capital. The criminal notice, dated January 3, states that the activists "showed an Israeli flag at a rally in an extremely provocative way and manner that was visible for participants at the rally and thereby produced considerable offense and provocation among the Palestinian protesters."

The German-language edition of the news site Vice first reported on Tuesday on the penalties against the three men and conducted an interview with one of the pro-Israel protesters.

"My mother is Israeli, her family [members] are refugees from Iraq and Libya," the pro-Israel protester said. "An Arab-speaking friend from Israel was able to translate some of the slogans yelled [at the rally], for example, the Arab battle cry to massacre Jews: 'Jews, remember Khaybar, the army of Muhammad is returning,' and... 'Death to Israel.'"

The Arabic cry references an ancient Muslim attack on Jews in the town of Khaybar in what is now Saudi Arabia, killing many and looting their homes. The provocative chant is frequently used when attacking Jews and Israelis, and was chanted on the Mavi Marmara Gaza flotilla ship in May 2010.

The activist, who was given the name Matthias F. by Vice to ostensibly protect his privacy, said he heard other chants of "Intifada" and "Child-murder Israel" at the rally that was attended by hundreds of anti-Israel protesters.

He added that, "We were shocked by these slogans and did not want to leave the slogans unchallenged. Antisemitism and hate of Israel should not be tolerated."

Vice showed a copy of the police notice with the criminal penalties on its website. The notice said the pro-Israel activity was "especially reckless," which "disturbed the public order."

The police, according to Matthias, made efforts to discourage the waving of the Israeli flag, but the protesters were permitted to wave the Palestinian and Turkish flags.

Immediately after Matthias and his friends rolled out the Israeli flag they were confronted by Palestinian demonstrators, who triggered a scuffle with the pro-Israeli activists, according to the Vice interview.

The police confiscated the Israeli flag and took down the personal information of the three men. The Palestinian attackers were allowed to return to the demonstration.

Matthias said the prosecution is "unbelievable. We simply held a flag." He said the men plan to seek legal aid and appeal the penalty. "It can't be that antisemitic slogans can be hollered and go unpunished while showing an Israeli flag is reason to be fined."