U.N. Inaction on United Kingdom of Great Britain and Northern Ireland
All Actions of the UN Human Rights System Critical of Specific States, 2018 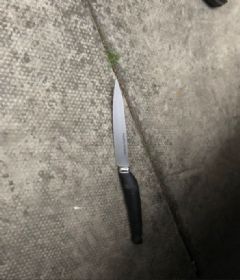 The knife used in the attack

A woman brandishing a 10-inch kitchen knife allegedly screamed "I want to kill all you Jews" as she chased a group of children who had just left a synagogue in north London.

Police arrested a 47-year-old woman on suspicion of a racially aggravated public order offence after she was tackled by neighbourhood watch volunteers in Stamford Hill, which is home to Europe's largest Hasidic Jewish community.

She is said to have run after a group of around 14 children aged between eight and 13 on Sunday night while shouting antisemitic abuse.

The woman was apprehended by volunteers from Shomrim, an Orthodox Jewish neighbourhood watch group, which then called police.

The group tweeted a picture of a large knife lying on the pavement following the incident. "This is another worrying incident of knife crime in London coupled with hate/antisemitic crime," said Rabbi Herschel Gluck, president of Shomrim.

He added: "Much more needs to be done to tackle and stop this terrible scourge which is tragically running rampant in our city."

The Metropolitan Police said it was called to reports of "a woman in possession of a knife behaving erratically" in Craven Park Road just after 9pm on Sunday.

A spokesman added: "At this time, the female remains in custody at an east London police station. She is expected to undergo a mental health assessment in due course.

"This incident is not terror-related."

Community Security Trust, a charity which looks to protect British Jews from hate, recorded 1,382 antisemitic incidents last year, the highest it has recorded. It said three-quarters of those were in London.