U.N. Inaction on Zimbabwe
All Actions of the UN Human Rights System Critical of Specific States, 2018 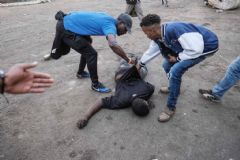 A protester after being struck by gunfire in Harare, capital of Zimbabwe

Running battles broke out in Zimbabwe's capital Harare, where troops opened fire on rioting opposition supporters, tanks took to the streets and military helicopters flew overhead, as the country's elections, which were meant to lead to a future of peace and normality, descended into vicious violence.

At least three people were reported killed and around 30 injured, as supporters of the opposition alliance repeatedly clashed with security forces after the country's election commission announced that the ruling Zanu-PF had won the country's parliamentary poll with a large majority.

Initial exchanges saw bottles and rocks flung from the crowd and police responding with tear gas, baton rounds and water cannons. The confrontation suddenly escalated with the appearance machine-gun mounted armoured personnel carriers (APCs). Troops streamed out of the vehicles into the crowd to, at first, use their rifle butts to hit people, and then open fire.

Some military officers claimed later that they had shot back in self-defence after coming under fire. There were sounds of some single shots, but most of it appeared to be staccato controlled bursts of semi-automatic rounds from assault rifles. Road blocks began to be put up shortly after the gunfire, tanks and APCs positioned themselves in Harare city centre.

The violence erupted following a confrontation outside Harare's Rainbow Towers hotel, where international observers from the European Union, the US and African states were delivering their reports into the election campaign and holding press conferences. The Zimbabwe Election Commission, meanwhile, was counting up the figures from the final round of constituencies.

The overall consensus among the European and American monitoring teams was that, despite some irregularities and "soft intimidation", the campaign had been remarkably peaceful compared with what had happened in this country in the past.

The first signs of the strife came as the chairwoman of the Zimbabwe Election Commission, Priscilla Chigumba, said that the victor in the presidential race between 75-year-old Emmerson Mnangagwa, the former ally and lieutenant of Robert Mugabe who played a key role in overthrowing him, and Nelson Chamisa, the leader of the Movement for Democratic Change (MDC) alliance, would be announced on Thursday afternoon.

Around 150 MDC supporters, mainly young men, gathered outside the hotel shouting slogans with placards, posters with photographs of Mr Chamisa along with tree branches â first seen being waved by protesters during the fall of Mr Mugabe last November â and denouncing the "fraud" at the polls. "We want the true numbers," they chanted as riot police faced then from behind the metal gates of the hotel, along with, "MDC won, Zanu-PF stole" and "Chamisa Our President."

A section of the crowd moved after a while to the nearby Zanu-PF headquarters. This was followed by sporadic and brief gunfire. Guards at the building had fired their handguns into the air to keep back the crowd, it was suggested. But it was claimed afterwards by some of the protesters that there had been snipers in action at upper-storey windows.

The mood turned ugly at the hotel with the crowd trying to surge past the gate and the police forcing them back. Tyres were lit on the road and rocks began to be thrown, with the police firing back baton rounds and tear gas. As more missiles came in, hitting some of the police officers, water cannons were turned on.

That dispersed the crowd, who moved off to a junction up the road, some of them smashing up street signs and traffic lights. Others remonstrated at this. "Why are you doing that, breaking things, public property?" Gabriel Akudzwe, wearing an MDC T-shirt, demanded to know as he pulled away a metal rod from the hands of a teenager. "This damage will have to come out of taxes. If we are going to be the next government, we need to behave responsibly".

Mr Akudzwe, an unemployed electrician, and his companion Christmas Itai complained about what they were convinced was a corrupt poll. "This is blatant, so blatant. Zanu-PF have never given up power and they are not going to now. Foreign observers mean nothing to them, they have been hoodwinked. Zanu-PF have been looting this country and they don't want to give it up", said Mr Itai, a 26-year-old who has not found a job since he graduated as an engineer. "What other choice have we got but protest?"

At this point a man they knew ran up with blood pouring from his head, caused he claimed, by a baton round. "The policeman fired straight at me, he could have hit me, blinded me in the eye, I was very lucky" he said, dabbing his forehead with a sodden handkerchief.

Immediately after this an APC came roaring around the corner followed by an army carrier. Soldiers rushed out and waded into the crowd following them as they fled. At one point they were pelted by stones and the shooting started. One young man fell and was dragged into an alleyway by those with him. One could not tell whether he had been shot or how badly he had been hurt.

"This is sad, very sad" said Mr Akudzwe, looking shocked, shaking his head. "I thought we had left those days behind. There was no need to use the army. We were with the army supporting them against Mugabe."

There were also skirmishes elsewhere in the city with MDC supporters attacking a police bus and overturning cars with Zanu-PF stickers. The security forces used whips to disperse protestors in one area. A few journalists were hit by soldiers, a few cameras smashed.

Later the justice minister said the military had been deployed to "restore peace and tranquillity". Ziyambi Ziyambi stressed that the soldiers "were not there to intimidate the people but to ensure that law and order is maintained. They are simply here to help the police." An unofficial curfew appeared to be in place in the evening with soldiers and police telling people to leave the streets and go home.

The United Nations secretary-general Antonio Guterres appealed to Zimbabwe's political leaders "to exercise restraint and reject any form of violence while awaiting resolution of the disputes and announcement of the election results".

The election campaign had started in violence with a grenade attack on a rally addressed by Mr Mnangwaga. Since then, however, the level of physical attacks have been relatively low.

But Mr Chamisa who had been claiming victory on a daily basis before, during and after the voting, had warned that the "theft" of the presidency from him and a parliamentary majority from MDC would lead to street protests. The party's secretary general, Douglas Mwonzora, warned on Wednesday: "We do not have any control on how the crowd will react."

MDC has already lost in the parliamentary polls, and as night fell in Harare there was deep foreboding about what may happen when the presidential results are announced with the coming day.