U.N. Inaction on Iran
All Actions of the UN Human Rights System Critical of Specific States, 2022 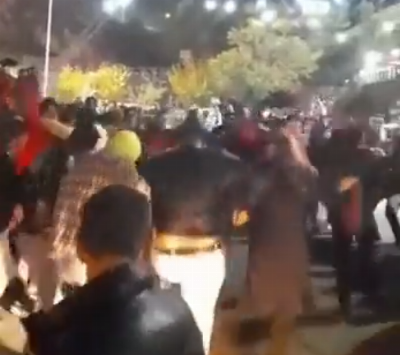 An Iranian man was shot dead by security forces after Iranâs national team lost to the US and exited the World Cup, as anti-government demonstrations took place inside and outside the stadium in Qatar and across Iran.

Mehran Samak, 27, was shot dead after honking his car horn in Bandar Anzali, a city on the Caspian Sea coast, north-west of Tehran, according to human rights activists.

Samak âwas targeted directly and shot in the head by security forces â¦ following the defeat of the national team against Americaâ, said the Oslo-based group Iran Human Rights (IHR).

The contest between the two countries which severed diplomatic ties more than 40 years ago took place against a backdrop of violent repression in Iran after protests triggered by the death in custody of Mahsa Amini, a 22-year-old Kurdish woman, in September.

Iranâs security forces have killed at least 448 people in the crackdown on the protests, including 60 children under the age of 18 and 29 women, according to IHR.

In an extraordinary twist, Iranian international midfielder Saeid Ezatolahi, who played in the US match and is from Bandar Anzali, revealed that he knew Samak and posted a picture of them together in a youth football team.

âAfter last nightâs bitter loss, the news of your passing set fire to my heart,â said Ezatolahi on Instagram, describing Samak as a âchildhood teammateâ.

Ezatolahi, distraught at the result, had been seen after the final whistle being comforted both by his teammates and the US players. Many Iranians had refused to support the national team, and after the match on Tuesday night, footage on social media showed crowds cheering and setting off fireworks.

The New York-based Center for Human Rights in Iran (CHRI) also reported that Samak had been killed by the security forces while celebrating. CHRI published a video from Samakâs funeral in Tehran on Wednesday at which mourners could be heard shouting âdeath to the dictatorâ. The chant, aimed at Iranâs supreme leader, Ayatollah Ali Khamenei, is one of the main slogans of the protests.

Late on Tuesday, the exiled Iranian journalist Masih Alinejad posted videos of celebrations on Twitter, writing: âIran is a country where people are very passionate about football. Now they are out in the streets in the city of Sanandaj and celebrate the loss of their football team against the US.â She also posted a video of fireworks being let off in Saqqez, Mahsa Aminiâs home town.

Iranians also celebrated in Marivan, which was among the cities in western Iranâs Kurdish-populated regions where, on 21 November, security forces intensified a crackdown that killed a dozen people over 24 hours, directly shooting at protesters and using heavy weapons, rights groups said.

There were also celebrations in Tehran and Sanandaj, Kurdistanâs capital.

The celebrations came after fans outside the stadium in Doha sought to highlight the protests and the Iranian governmentâs crackdown. âEverybody should know about this. We donât have a voice in Iran,â an Iranian living in the US, who gave his name only as Sam, told Reuters.

Speaking by phone from Tehran shortly before kick-off, Elham, 21, said she wanted the US to win because victory for the national squad, known as Team Melli, would be a gift for Iranian authorities. âThis is not my national team. It is not the melli team, it is the mullahsâ team,â she said.

Extra security personnel, some mounted on horseback, patrolled outside the Al Thumama stadium before the match, while guards at the perimeter made Iranians unfurl their flags before entering. Police were stationed throughout the stadium alongside regular security guards. Some carried batons.

Early in the second half, a group of fans briefly held up letters spelling Mahsa Aminiâs name to applause from the Iranian supporters around them. Security personnel took their signs but allowed them to remain in their seats.

Under pressure to publicly support protesters at home, the Iranian team declined to sing the national anthem in their first game against England, which they lost 6-2. But they sang it before the second game, a 2-0 victory over Wales, and again on Tuesday. When Iran lost to England, there were celebrations in Tehran too.

Outside the stadium after the match, Reuters journalists saw security chase two people in a series of scuffles on the groundâs perimeter. Three guards pinned one man to the ground who was wearing a T-shirt emblazoned with the words âwoman, life, freedomâ, the central slogan of the Iranian protest movement.