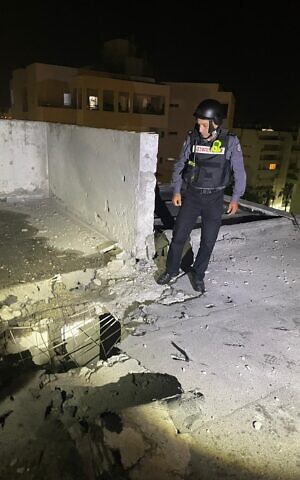 A firefighter stands over the impact site of a rocket fired from the Gaza Strip that hit a building in the city of Ashkelon, injuring a man, on May 14, 2021. (Fire and Rescue Services)

Doctors at Sheba Medical Center in Ramat Gan pronounce the death of a 50-year-old woman who was seriously injured while rushing to a bomb shelter on Tuesday during a rocket alarm.

The death toll in Israel since the fighting started has thus reached nine, including an 87-year-old woman who slipped and fell last night while sirens warned of rockets fired by terrorists in the Gaza Strip.